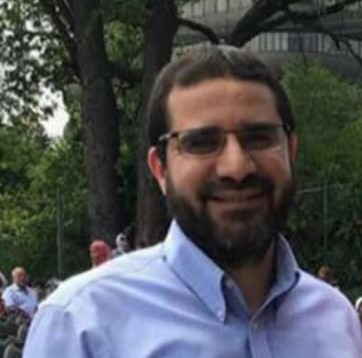 Amal al-Baz, the daughter of Yasser al-Baz, announced that her father, who was arrested at Cairo Airport at the end of a business trip in February 2019, has been released and is back in Canada. She confirmed that her father, a Canadian engineer, needs medical treatment.

Yasser is lucky because his detention has ended and he has been released alive. Canadian Prime Minister Justin Trudeau said in February that he raised al-Baz’s case during a meeting in Addis Ababa with Egyptian President Abdel Fattah al-Sisi. “We are happy to announce that Yasser al-Baz has been released by Egyptian authorities and has arrived this morning at Toronto Pearson International Airport,” his daughter said in a statement. “Yasser’s health has deteriorated and our top priority will be his much-needed medical treatment,” she added.

Amal has been fighting tirelessly to bring al-Baz home and for the Canadian government to treat his case as urgent. In mid-June the family received information that Yasser may have been infected with coronavirus (COVID-19) in prison.

Detainees in Egyptian prisons suffer from severe overcrowding, lack of hygiene, adequate healthcare, and protection against the spread of viruses. Human rights organisations said that at least dozens of detainees have been infected with coronavirus and that the Egyptian authorities have not taken adequate measures to protect the detainees. Human rights organisations demanded the release of political detainees and detainees in pretrial detention in order to ease overcrowding in Egyptian prisons, but all these requests were rejected.

Despite his detention for more than a year and the fact that his health is suffering, Yasser al-Baz is considered one of the lucky ones, because he returned to his family alive despite all of this. Human rights organisations say the Egyptian regime has arrested thousands of political opponents and keeps them on remand without any real evidence or charges.

Last January, Mustafa Kassem, an American of Egyptian descent, died in prison after being repeatedly on hunger strike since September 2018 to try and secure his release. Kassem, 54, was initially on hunger strike, but suddenly he completely abstained from consuming fluids before his health deteriorated and he was transferred to the prison hospital and then to the Kasr al-Ainy Hospital, where he died. Kassem spent more than six years in an Egyptian prison and never returned to his family.

In recent weeks, more than 10 Egyptian political prisoners have died, after they showed symptoms of coronavirus, according to Egyptian and international human rights organisations. There are no accurate statistics on the number of deaths and infections among detainees as a result of the security blackout. The Egyptian authorities have prevented visits and the entry of medicine, sterilisers and medical supplies for detainees for several months.

Instead of the Egyptian authorities releasing the detainees amid the covid outbreak, similar to what happened in several other countries, the Egyptian security forces continue to arbitrarily arrest citizens on a daily basis.

Although Yasser al-Baz’s release is a happy event, it opens the door to questions about the independence of the Egyptian judicial system, as the Egyptian regime usually releases detainees of foreign nationalities under pressure from their governments, while refusing to release Egyptians.

General Abdel Fattah al-Sisi has overseen a crackdown on dissent that has targeted liberal opponents as well as the Islamists who briefly held power after the Arab Spring. Tens of thousands of people have been detained. Many of the detainees in pretrial detention exceeded the two-year period – the maximum legally specified period of pretrial detention – without being convicted.

The Nation’s Future Party and the problem of creating a ruling...