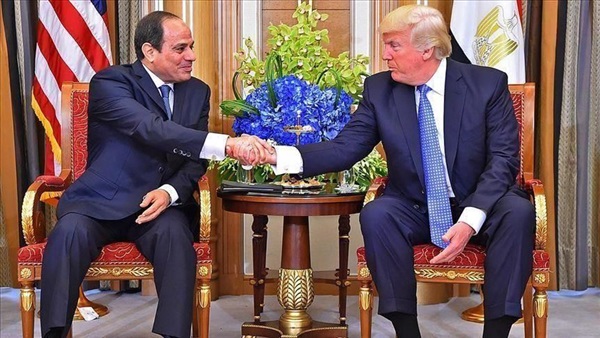 The Egyptian president’s office and the White House has said that there is a consensus between US President Donald Trump and Egyptian General Abdel Fattah al-Sisi on immediate de-escalation in Libya and to “establish a ceasefire in Libya” as a prelude to activating dialogue and political solutions. This came during a phone call on Monday, conducted by al-Sisi with Trump, which dealt with developments in the Libyan issue and the developments of the Renaissance Dam, according to a statement issued by a spokesman for the Presidency of the Republic.

The phone call coincided with the approval of the Egyptian parliament, on Monday, to send elements of the Egyptian armed forces on combat missions outside the country’s borders with President Abdel Fattah al-Sisi’s authorisation. Al-Sisi discussed developments on the Libyan issue, as he reviewed Egypt’s strategic position aimed at restoring the balance of Libya’s pillars and its national institutions, he said.

Trump praised the Egyptian efforts towards the Libyan issue, which would enhance the course of the political process in Libya. Al-Sisi recently met a delegation said to be the elders of Libyan tribes (loyal to the forces of General Khalifa Haftar) who called for military intervention in Libya. This meeting came days after the House of Representatives in Tobruk, eastern Libya, called on al-Sisi to intervene militarily to “defeat the Turkish invasion.”

Al-Sisi offered to arm and train the Libyan tribes’ youth to confront the Government of National Accord (GNA) forces. But al-Sisi’s calls were condemned by the Libyan tribes and countries such as Algeria, which thought this would turn Libya into a new Somalia or Syria.

On the other side, Turkey continues to support the GNA, stressing that it is not concerned with a military confrontation with any country in Libya, especially Egypt and France.

The Guardian: NGOs criticise the Egyptian govt and UN over Cop27