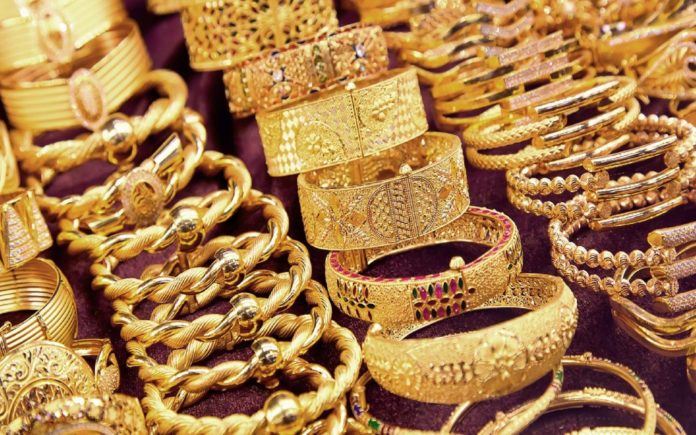 Gold prices in Egypt have risen to a new historical level, as the gram price jumped to more than EGP 12 in one go. (One US dollar equals approximately 16 EGP). The price of a gram of 21-carat gold, the most popular in Egypt, reached EGP 826, after an unprecedented rise in the international price of the precious metal, to the highest level in nine years.

The high price of gold in Egypt comes in light of an unprecedented stagnation in sales since the beginning of this year, affected by the outbreak of the coronavirus and the postponement of many Egyptian families of weddings in which the husband provides his bride with golden gifts, popularly known as “al-Shabkah.” Many economists and gold traders also expected the price of gold to continue to rise in Egypt, expecting it to be recorded at EGP 1,000 per gram during the next few months.

The high price of gold in Egypt came after its increase globally in spot transactions by 0.9 per cent to $1,856.13 an ounce after recording its highest levels since September 2011 at $1,865.35 earlier in the session. According to what was published by Reuters news agency, gold increased by more than one per cent in trading on Wednesday to the highest level in nearly nine years, driven by the weakness of the USD. The economic expectations, about more stimulus measures to revitalise the coronavirus pandemic-affected economies, have boosted the appeal of the precious metal as a haven from inflation.

Record highs during the last period of gold prices in Egypt cast a shadow on the local market, with the citizen’s inability to acquire and buy the yellow metal.

According to press statements from Nagy Farag, a member of the Board of Directors of the Gold Division in the Cairo Chamber of Commerce, “The high price of gold affects the movement of sales in the market negatively. The higher the value of the increase, the greater the percentage of stagnation in selling with the decline in the purchasing power of citizens.” “Those who want to sell their jewellery are waiting for prices to reach their highest levels, hoping for a bigger gain,” he added. Faraj said that he expects gold prices in Egypt to rise from the current level, in light of the current political tensions.

Observers also expected the price of a 21-gram gold to rise to EGP 1,000 during the next few months, as a result of tariffs and taxes on China’s exports by 10 per cent.

For his part, Wasfi Amin, head of the gold division at the Cairo Chamber of Commerce, explained the high gold prices in Egypt and the world at the continuation of the corona pandemic, in addition to the global price of the dollar, which raised the demand for a safe haven, according to press statements. The price of gold in Egypt is affected by several factors, most notably the price of the dollar against the pound in the local market, which is currently rising. Also, ounce prices are affected by the gold exchange, global economic decisions, and the decline in oil or the contraction of the global economy.

Meanwhile, Nadi Naguib, Secretary-General of the Golden Jewellery Division of the Cairo Chamber of Commerce, confirmed that gold sales have decreased by 25 per cent since the spread of the coronavirus. Bushra Ibrahim, a member of the Gold Division of the Cairo Chamber of Commerce, said that the market is in a recession as a result of the economic situation in the country after the spread of the coronavirus. He added that citizens’ interest was limited to buying consumer goods, and thus the demand for gold decreased by 70 to 80 per cent.

In conjunction with the rise in gold prices in Egypt and the world and its unprecedented leaps, European Union leaders concluded an agreement on Tuesday regarding a 750-billion-euro recovery plan. As discussed with White House officials and senior Democratic members of the US Congress, another round of support measures will include extended unemployment insurance and the allocation of more money to schools.

The yellow metal also received support from the USD index, which lies near the lowest level in more than four months. Despite the decline in USD price globally, the USD price has risen compared to EGP. As for the prices of other precious metals, silver continued its rise and increased by 4.7 per cent to $22.33 an ounce, its highest level since October 2013. Palladium fell 1.1 per cent to $2133.32 an ounce, and platinum fell 0.7 per cent to $875.49 an ounce.