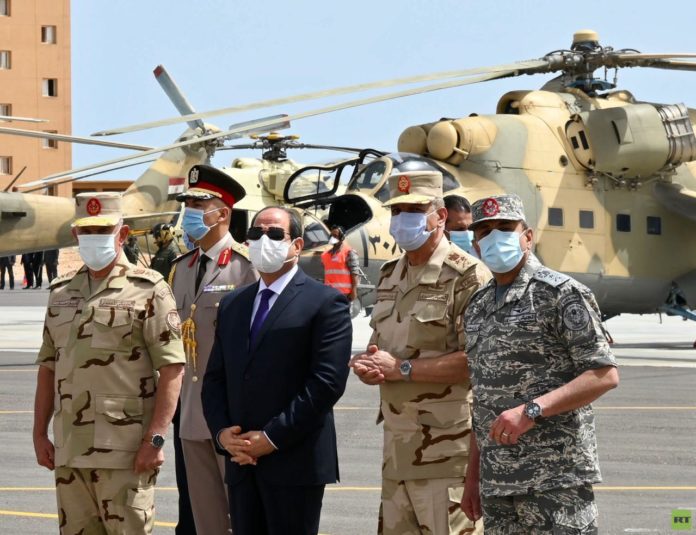 Popular rejection and fears have escalated in Egypt of the regime’s military intervention in Libya, especially after the Egyptian parliament announced its mandate for General al-Sisi for military intervention and to confront the internationally recognised Libyan Government of National Accord (GNA). The Egyptian street is dominated by a state of anxiety and anticipation of the consequences of throwing the army and its soldiers into the Libyan crisis, especially as the Egyptian official position is biased to the illegal party represented by the forces of the Libyan General Khalifa Haftar (LNA) in eastern Libya. The Egyptian parliament’s decision to authorise al-Sisi came after the parliament in eastern Libya, which supports Haftar, allowed Egypt to intervene militarily in Libya to “protect the national security” of the two countries, according to its statement. On the other hand, waves of popular rejection poured out over social media, as activists warned of falling into the trap and indulging in the quagmire of the Libyan internal conflict by launching a hashtag entitled “I did not authorise,” via Twitter and social media websites.

Thousands of tweets were posted under the hashtag, and the participants expressed their concern about the possibility of losing Egyptian soldiers in a war that is not for the people. The popular rejection of the parliamentary mandate granted to al-Sisi also appeared through a number of electronic referendums, where a sweeping proportion of the lack of approval to send Egyptian forces to Libya, especially that the most important from their point of view is to confront Ethiopia on the issue of the Renaissance Dam.

The tweets warned against implicating the Egyptian army in a war in which it has no interest, stressing that Egypt has no right to interfere in Libya, especially since the Egyptian confrontation will be with the internationally recognised legitimate government based in Tripoli in the west of Libya. Last Tuesday, the Egyptian parliament announced that a session was held to discuss granting the approval to send army forces outside the border in a western direction. The session was attended by 510 members of the council, out of a total of 640 members of parliament, in a secret session.

Article 152 of the Egyptian constitution obliges the president, in his capacity as the supreme commander of the armed forces, to “not declare war, nor send the armed forces on a combat mission outside the borders of the state, except after taking the opinion of the National Defence Council and the approval of the House of Representatives by a two-thirds majority of the members.” Al-Sisi’s parliamentary mandate came in conjunction with a state of media mobilisation to prepare public opinion in Egypt for military intervention in Libya, through media outlets close to the Egyptian regime and satellite channels that have, over the past days, been broadcasting national songs.

Egyptian media outlets have claimed that sending Egyptian forces to Libya has popular and official support, and that the move aims to counter Turkish influence and liberate Libya from the Turkish army. On June 20, Egyptian President Abdel Fattah al-Sisi warned that the progress of the GNA forces, supported militarily by Turkey, to liberate Sirte and al-Jafra from the hands of the LNA forces, might push his country into direct military intervention in Libya.

Al-Sisi’s warning came after heavy defeats that Haftar’s forces suffered from, and its losses to many Libyan cities in the West, despite Egyptian and Emirati support. The Egyptian general stressed that Sirte and Al-Jafra is a “red line” that should not be crossed by the GNA.

On the other hand, Turkish Foreign Minister Mevlüt Çavoyşoglu replied in a televised statement to al-Sisi: “The National Accord Government must control the coastal city of Sirte and the airbase in al-Jafra before agreeing to a ceasefire.” There were also reports recently of the Libyan National Accord government mobilising its fighters around Sirte in preparation for a decisive battle to regain control of Haftar’s forces, amid concern that the matter may develop into a military confrontation between Cairo and Ankara.

Despite the escalation of statements and media mobilisation, a military source told Egypt Watch that al-Sisi will not make a decision to military intervene directly in Libya. The source pointed to the phone call al-Sisi made with US President Donald Trump, during which they agreed to stop the military escalation immediately in Libya.

The source pointed out that the Egyptian regime, which is going through an acute economic crisis, obtained significant financial aid from the UAE and Saudi Arabia, which are trying to push it to direct military intervention in Libya to face the growing Turkish influence: “He got huge financial aid, but it is to solve the economic crisis, not [for] fighting.”