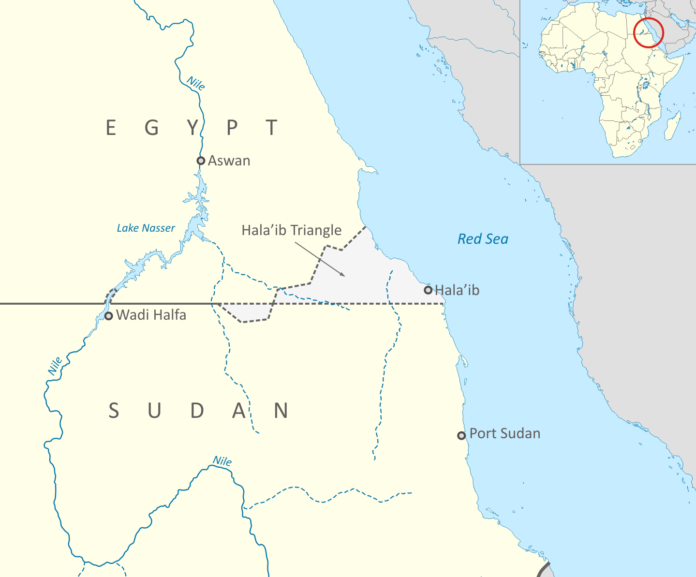 The issue of the border dispute between Egypt and Sudan regarding the Halayeb Triangle has come to the fore again after the statements of the Commander-in-Chief of the Sudanese Armed Forces and the Chairman of the Transitional Sovereignty Council, Lieutenant General Abdel Fattah al-Burhan. Al-Burhan said during his address to the non-commissioned officers and soldiers of the Sudanese Armed Forces in Khartoum State, at the Armed Forces’ celebrations of its 66th anniversary, that the armed forces “will not leave an inch” of Sudan’s land. According to the official Sudanese News Agency, he added: “We will not back down from our right, and we will not forget it until the flag of Sudan is raised in Halayeb and Shalateen and everywhere in Sudan.”

The Sudanese National Border Commission issued a statement last month in which it said that the facts of history, geography, and law confirm that the Halayeb Triangle is 100 per cent Sudanese, and there is no doubt about that.

The new statements and data confirmed that the border dispute between Egypt and Sudan did not stop in light of the remarkable rapprochement between the two countries during the Renaissance Dam negotiations. The conflict has been ongoing since 1995 after the Egyptian army took control of the triangle in response to tension between Hosni Mubarak and Omar al-Bashir. The tension in relations came after the assassination attempt on the late Egyptian President Hosni Mubarak, in the Ethiopian capital, Addis Ababa, as Cairo accused Khartoum of being involved, which the latter denied. In previous statements al-Burhan said that Halayeb is Sudanese and that his country hopes to settle this issue, without giving details.

The disputed area on the African side of the Red Sea is 20,580 km2. There are three major towns within it: Halayeb, Abu Ramad, and Shalateen. The Egyptian-Sudanese dispute goes back to 1899 when the two countries’ borders were demarcated according to the condominium agreement between Egypt and Britain. The agreement included areas from the latitude 22 north of Egypt, on which the Halayeb Triangle is located. After three years, the British occupation, which was ruling the two countries at the time, returned the Halayeb Triangle to the Sudanese administration, because the triangle is closer to Khartoum than to Cairo.

In 1958, Egyptian President Gamal Abdel Nasser sent forces to the region, and he withdrew them shortly afterward, to intercept Khartoum. The conflict resurfaced in 1992 when Egypt objected to granting the Sudanese government the right to explore for oil in Halayeb Triangle’s coast through a Canadian company. Hence, the company withdrew until the issue of sovereignty over the region was settled. In July 1994, Sudan sent a memorandum to the United Nations, the Security Council, the African Union and the League of Arab States. The Egyptian government has complained of 39 raids launched by the Egyptian forces on the Sudanese borders, since the Sudanese government submitted a previous memorandum in May 1993. In 1995, the ousted President Mohamed Hosni Mubarak refused the Egyptian government’s participation in the negotiations of the African Union foreign ministers in Addis Ababa to resolve the border dispute.

The Halayeb and Shalateen area is inhabited by tribes that extend their historical roots between the two peoples, and these tribes also move across the borders between the two countries. Egypt has recently established several investment projects in the region through companies affiliated with the army. In 2016, the Sudanese Ministry of Foreign Affairs, in a statement, called on Egyptian authorities to directly negotiate a solution to the issue of the Halayeb and Shalateen areas. The Sudanese statement said that the negotiation request was “similar to what was done with Saudi Arabia regarding the islands of Tiran and Sanafir, or resorting to international arbitration as the decisive factor in such cases as happened in Taba’s return to Egyptian sovereignty.”

On the other hand, a spokesman for the Egyptian Foreign Ministry affirmed, in a statement, that “Halayeb and Shalateen are Egyptian lands and are subject to Egyptian sovereignty,” and said: “Egypt has no additional comment.”

The debate between Sheikh al-Azhar and Cairo University’s president