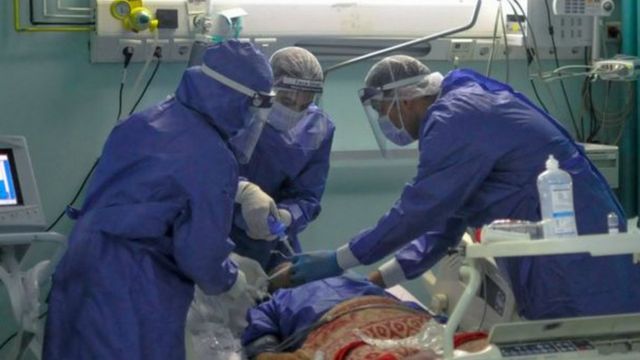 “Corona vaccination centres have turned into a centre of infection.” This is how the situation of what is happening in Egypt can be described, especially with the elderly and people with chronic diseases, who enrolled among those eligible for the vaccination against the virus.

In one of the El-Matareya clinics (east of Cairo) for health insurance, nearly 100 people stood in a state of overcrowding and poor order, spending more than seven hours to receive the vaccine.

The clinic witnessed the chaos, which a member of the Scientific Committee to Combat Coronavirus and others considered capable of transforming vaccine distribution centres into hotspots for spreading infection. Amid this overcrowding and the anger of the elderly, the doctor in charge just kept asking them to hand over their ID cards and wait for their names to be called. Later, he arbitrarily asked them to bring medical reports proving that they have chronic diseases or set another date for receiving the vaccine.

Ibrahim Abdel Hamid (62-years-old) says that he went to the Al-Matareya Al-Shameliya clinic 12 hours after receiving a phone message asking him to come to receive the coronavirus vaccination. Upon his arrival, he saw huge crowds in front of the clinic’s headquarters in Shajarat Maryam, north of Cairo. He asked an employee at the clinic reception about the procedures for getting the vaccine, and they replied: “If you received a letter, give me your ID card.” Abdel Hamid handed his card and waited for the employee to complete the rest of the procedures before asking him to stay “in the crowd.”

The old man repeated his request to the employee to explain to him what exactly the procedures were before getting the vaccine. However, the employee met these demands by asking all those inside the clinic to get out of it. The majority of those present protested against the employee’s method. They demanded that they speak to the official in charge of the clinic to clarify the procedures or give them the ID cards to leave without getting vaccinated.

In the face of citizens’ complaints and verbal altercations between them and the receptionist, Dr. Rania Saeed (who introduced herself as the head of the clinic for the elderly) apologised for the poor organisation, saying: “Excuse us … we work 12 hours a day.” She continued: “We will record your names from your ID cards on a list in the order of attendance. Then, we will distribute application forms to you. Then we will enter the data into the system. Then we will ask you to enter one by one to sign the form and get vaccinated.”

The doctor entrusted another employee to write a list of the attendees’ names in order of the personal cards. It took two and a half hours, and the employee wrote 265 names. Another employee gave two forms to each person to fill out their medical history and personal data. Then, at one o’clock in the afternoon, the doctor began receiving the first five to examine inside the clinic, re-entering their data on the form into the computer system, then asking them to sign by typing the name and fingerprint.

Then, they were handed a card stating that they had received the first dose of the vaccine, which included the date of the second dose of the vaccine. Then, employees directed them to another room in which an employee and a nurse were present, the first re-registering the name again in a written notebook, and the second injected the person with the vaccination. Abdel Hamid says that “after six hours of waiting, the doctor refused to give me the vaccine,” explaining that he was No. 73 in the queue. After he completed all the procedures and signed and fingerprinted the form, the doctor asked him for a medical report indicating that he was a “chronic patient.”

He handed her his health insurance card, on which the monthly treatment he received was written. Still, the employee refused and told him that the system asked him for a medical report. Abdel Hamid says: “The medical director intervened and asked for the ID card to be photographed and attached to the medical report. She apologised, and I got the vaccination. He adds that two women following him in the order (74 and 75) were unable to obtain the vaccination because they did not submit medical reports, the first proving that she had diabetes. The second had an immune disease called lupus.

What happened in Al-Matareya was repeated in other areas, according to video-documented testimonies of several people on social media, with additional problems related to providing fewer doses than required in some centres. Commenting on this, a member of the Medical Council, Ibrahim Al-Zayat, said that it is “a dangerous bell that threatens the lives of the elderly.” Al-Zayat stressed that the matter is getting worse in Upper Egypt and Cairo governorates, as it is the most populous. He pointed out that the crowding and the lack of simple medical examinations from measuring temperature and pressure before getting vaccinated are suitable environments for spreading the coronavirus and not prevention.

Hamdi Ibrahim, a member of the Scientific Committee to Combat Coronavirus, admitted that there were shortcomings in the procedures related to organising the procedures for giving the vaccine in some centres, especially for the elderly. However, he considered that raising people’s awareness and following the precautionary measures, and avoiding crowding inside the vaccine distribution centres, may be a solution to vaccinate a more significant number of citizens in the least possible time.