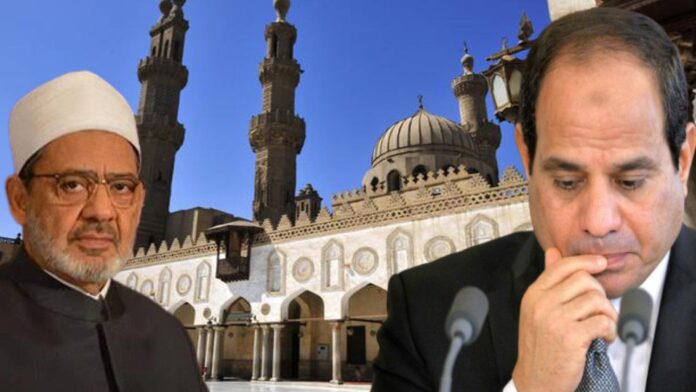 “Al-Azhar always wins.” These few words encapsulate the acute crises between the presidency in Egypt led by Abdel Fattah al-Sisi, and its various agencies and branches, and the al-Azhar Foundation and its Sheikh Ahmed al-Tayeb.

There have been six crises, in which al-Azhar emerged victorious so far and implemented what it wanted, even if it was contrary to what the various executive bodies in the country sought. This is despite the fact that al-Tayeb was one of the most prominent supporters of the military coup on July 3 2013 and participated in the statement al-Sisi made while he was Minister of Defence at the time, to announce the road map in a post-Mohamed Morsi era. However, the conflict began since the dispersal of the sit-in made up of Morsi’s supporters in the fields of Rabaa al-Adawiya and al-Nahda, when al-Tayeb announced his disproval of the blood shed.

Al-Tayeb announced his retirement in his city Sohag (south of the country), refusing to accept that the sit-in be broken up using force. Upon his return, a muffled disagreement between the two men began. Al-Sisi began to confirm dissatisfaction with al-Tayeb’s performance and even hint at his marginalisation in exchange for others’ support, including the former Mufti Ali Gomaa, and his religious advisor, Osama al-Azhari, perhaps planning to dismiss him.

In December 2014, al-Azhar issued a statement refusing to declare ISIS as apostates. After Al-Azhar’s statement, the dispute deepened after al-Tayeb confirmed this again in January 2015. Critics of al-Azhar’s position believe the terror group are out of the region of Islam and into the region of disbelief. So far, al-Azhar remains steadfast.

One of the aspects of the disagreement between al-Azhar and authorities was converting the unified sermon into a written sermon as the Ministry of Endowments wanted. Al-Azhar rejected this until the ministry retreated. Whereas the Ministry of Religious Endowments wanted the Friday sermon to be written, which is a paper containing a unified text which the preacher (the imam of the mosque) is supposed to read every Friday, from above his pulpit, from the paper and not improvise.

The Council of Senior Scholars (the highest religious body affiliated with al-Azhar) in Egypt decided to refuse to apply the written sermon, considering it a “freezing of religious discourse.” The Senior Scholars said that applying the “written sermon” would lead, not long after, to a flattening of the preacher’s thought and his inability to discuss deviant ideas. Faced with al-Azhar’s rejection, the Ministry of Religious Endowments retreated.

Another crisis at the beginning of 2017 was over verbal divorce. Al-Sisi called for a law to be issued stipulating that divorce should not take place except in front of a marriage official, that is, the prohibition of divorce verbally. Al-Sisi used all means to promote his idea, starting with the use of the media, passing through legislative intervention through parliament, and then resorting to opinion polls.

The atmosphere of tension was evident when al-Sisi said to the Sheikh: “You make me tired, honourable Imam.” At that time, many intellectuals and writers affiliated with the regime intervened to attack al-Tayeb, and the matter extended to some advocacy figures. Despite the urging of al-Sisi and his various branches, the Scholars Council of al-Azhar al-Sharif rejected his request, considering it to be contrary to Islamic principles.

The escalation of the dispute between al-Azhar and the presidency prompted some voices to call for the amendment of al-Azhar’s law. These media arms accused the law of being an obstacle to the movement to renew religious discourse and consider its approaches a reason for the spread of extremism and terrorism in Egypt.

Accordingly, the majority coalition in the Egyptian parliament sought to enact legislative amendments regarding the selection of members of the Council of Senior Scholars, the method for appointing the Sheikh of al-Azhar, and the possibility of intervening to remove him. As the dispute escalated, Egyptian public figures intervened, and the bill was halted.

The ongoing crisis that has not ended yet is the “renewal of religious discourse.” Al-Sisi always links the issue of the bombings to not renewing religious discourse, which is entrusted to al-Azhar. Consequently, all pro-government media outlets began attacking al-Tayyib. The campaign of pressure on al-Azhar has expanded to include the curricula taught in religious institutes and colleges of al-Azhar University, which loyalists of the current regime considered “raising violent generations.” Since that time, media professionals describe Islamic heritage books, which were based on the service of the Qur’an and the Sunnah, as books of human waste that represented a curse on the Ummah, which must be burned and buried.

The attack on al-Azhar and its leadership remained a rare matter in Egypt, except the voices of a few thinkers who voiced criticism of its approach. Still, it has been noticed in recent times that the severity of the institution’s criticism has increased. Many newspapers started to research al-Azhar’s curricula and selected some of the texts from it and are holding it in part responsible for the spread of extremist thought. However, soon, other voices also affiliated with the regime, will return to defend al-Azhar and its institutions.

As for the last crisis from which al-Azhar emerged victoriously, the fatwa law, which MPs affiliated with the system sought to pass to reduce its powers. The draft law aimed to reorganise everything related to the mufti in terms of his employment status, procedures for his appointment and selection, the duration of his tenure, renewal and his powers. The bill also determined whoever acts on the mufti’s behalf in running the house’s affairs in general in certain circumstances. Also, this law would mean al-Azhar would lose its authority to supervise fatwas.

Faced with al-Azhar’s rejection, and al-Tayeb’s request to attend a debate session in parliament, the deputies were forced to postpone it to the new parliament, whose members are to be elected in principle next October. Between the attack and the defence, the Sheikh of al-Azhar remains a silent loner, who speaks little and no longer appears extensively in the media to present his point of view on various issues.