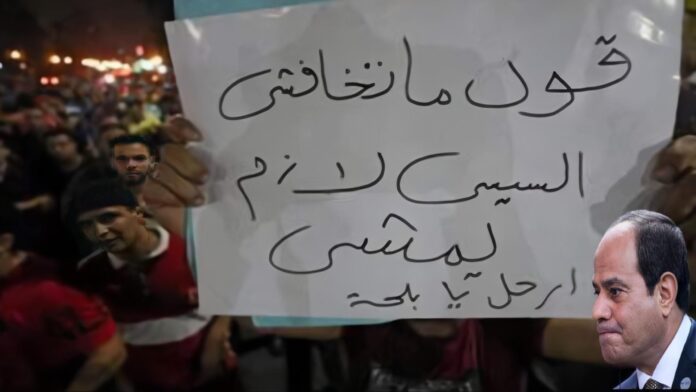 Egyptians complained of a slow internet connection late on Sunday night, in conjunction with the outbreak of demonstrations and limited protests against General Abdel Fattah al-Sisi, calling for his departure.

Activists circulated confirmations of a decline in the speed of the internet in the country, and some said that they could not download or watch videos on Facebook and Twitter, while others confirmed that they are facing a problem browsing the Internet in general.

Many linked the matter with the limited demonstrations that erupted on Sunday evening in several Egyptian cities and villages calling for al-Sisi’s departure. In conjunction with this, new hashtags occupied the forefront of Twitter in Egypt, most notably #Revolution_started, # Tahrir Square, and #Down_the rule of the military. Calls to demonstrate against al-Sisi have increased over the past few days, led by the Egyptian contractor and opposition figure residing in Spain, Mohamed Ali.

The Egyptian security forces have been deployed extensively in the streets, squares, and central cities, amid random searches of passers-by that included arrests. Demonstrations took place on September 20 and 27 of last year, in response to previous calls made by Mohamed Ali after he published a series of videos in which he accused al-Sisi and other army leaders of corruption and stealing public money. As a result, Egyptian security forces arrested about 4,000 citizens.

The curse of sexual harassment pursues a Moroccan in Egypt