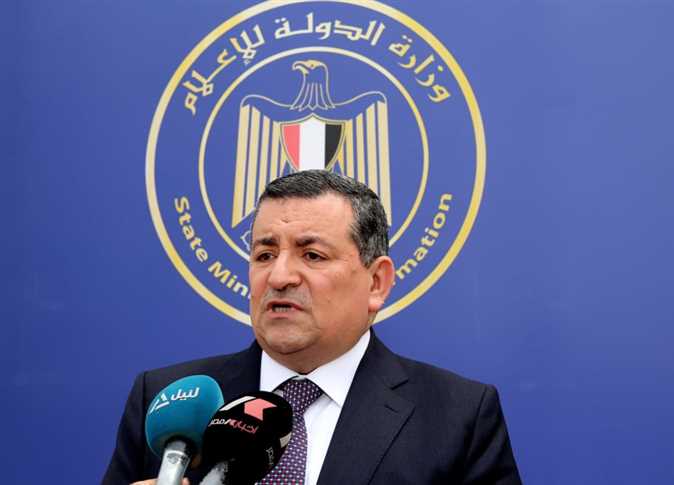 In what came as a big surprise, Egyptian state television broadcast on one of its programmes leaked audio recordings of a systematic attack on Egyptian Minister of State for Media Affairs Osama Heikal, launched against him by Egyptian newspapers and channels.

The Egyptian broadcaster Wael al-Ibrashi on Channel One, state television, accused the Egyptian Minister of Information of being biased towards the media of terrorist groups, referring to the opposition satellite channels broadcasting from abroad.

Although espionage, registration, and privacy disclosure are prohibited by law except with prior judicial permission, the Egyptian media have systematically used this to distort opponents over the past years. However, it was strange that a minister who is still in power was being targeted.

The Egyptian minister’s crisis with the media began when he said that Egyptian youth, starting from 35 and younger, no longer read newspapers or follow Egyptian channels. A new approach should be considered to attract them. He pointed out that the segment that does not follow the media (loyal to the regime) represents approximately 65 per cent ​​of society. Although Heikal’s words were not directed at a specific person (at least on the surface), it sparked a fierce attack against him.

Many media professionals and journalists loyal to the Egyptian regime accused him of distorting the Egyptian media’s image in favour of the opposition media and demanded that he be silent.

The war is raging

In the face of the fierce attack campaign, Heikal returned to attack those media workers again, stressing that his response would not be on them, but on those who give them instructions. Heikal wrote on his Facebook account: “The orders were issued to launch a new campaign against me after a previous campaign two months ago, at the same time, and with the same words. They said that I should look for another job.” He added, “One of them accuses me that with my statements, I will cause advertisers not to advertise in newspapers; no creativity at all … the same words and the same names, and the same timing.”

Heikal added, “I tell them that the most dangerous type of corruption is for the writer to leave his pen to others, and to be sufficient with signing, and the truth is that I do not want to respond to these people because they are just tools.” He also wrote: “But I will respond to those who gave the order to write, and they did not hesitate for a moment, coveting satisfaction, amnesty, and forgiveness, because if they did not comply, they would be overthrown.” He added, “I respond in principle to the one who gave the order … that I will not be silent, for I am telling the truth, and the truth will emerge sooner or later. You have wasted many and many are without experience or a clear goal.”

Regarding Heikal’s statements that will negatively affect newspaper advertisements, he replied: “The real official distribution numbers are in place, and your newspapers have been free of advertisements for many months even before I took office. If you announce them, everyone who participated in these crimes must be held accountable.” Heikal accused these journalists of being prevented from writing about the Ministry of State for Information except to criticise it. They were not allowed to communicate with the Ministry of State for Information and its minister to determine what the ministry did during the past nine months.

Those journalists warned that if they chose to continue attacking him “on the same approach, it is my right to respond and clarify the picture, so I do not have to put up with media errors committed by others.” Heikal’s recent responses significantly increased the intensity of the battle. It represented a confession from a minister within the Egyptian regime who revealed for the first time that direct orders are moving the Egyptian media by someone within the system and that no media is free in Egypt.

Although Kamel and Shaaban were in the MIRA, they moved to the GIS, under the direct orders of al-Sisi, in an attempt to fully control the agency, which was not fully satisfied with what was happening in the country. Later, Kamel established his empire within the GIS and appeared to be able to operate many files independently of his old agency.

Over the past years, it has been evident that all Egyptian television channels and newspapers deal with the same topics, in the same terms, opinions, and even phrases, without any difference between them. However, the narrow climate for freedom and repeated sentences prompted the reader and viewer to boycott Egyptian newspapers and channels loyal to the Egyptian regime. Viewers of Egyptian channels, and newspaper sales, have fallen dramatically. Egyptian newspapers and channels repeatedly announced restructuring plans and changed the most prominent broadcasters’ faces, but the content remained the same.

A former MIRA officer admitted to Egypt Watch that the Egyptian presidency became aware that Kamel and Shaaban had failed to manage the Egyptian media. Under pressure from the MIRA, al-Sisi began to take some measures to reduce GIS’ control over the media. In December 2019, al-Sisi decided to reinstate the Ministry of Information (media) and issued a decree appointing Osama Heikal as Minister of State for Information Affairs.

Osama Heikal was associated with the army because he was a military liberator for a long time. It was clear that MIRA was planning to extend its influence in the Egyptian media at the GIS’ expense. The General Intelligence was not satisfied with this, so it began a campaign against the Military Intelligence loyalists, removing them from the scene.

Among the most prominent victims of this campaign was the former head of the Supreme Council for Media Regulation, Makram Muhammad Ahmed, and the Chairman of the Board of Directors of the Akhbar al-Youm Foundation Yasser Rizk. The campaign also included intimidation of the former military spokesman, who is very active in the media field, Mohamed Samir, and the artistic producer Yasser Selim. Sources say he is a former intelligence officer who was the arm of al-Sisi’s regime in the field of artistic production and media.

A commander without soldiers

The former MIRA’s officer said that Heikal found himself a commander without soldiers and that his mission was thwarted before it began. The military source confirmed that Shaban issued strict orders to all newspapers and channels to ignore Heikal, not publish his statements completely, and attack him.

The military source indicated that the attack on Heikal began since he took over the ministry, as newspapers and websites affiliated with the GIS began to criticise the Ministry of Information’s return. Regarding his expectations about the GIS or MIRA winning that battle, he indicated that this is linked to several things. He explained, saying: “It is now clear that the strongest side in media is the GIS. For years, it has completely controlled the Egyptian media and is trying frantically to destroy any new MIRA arms in that field.”

He added: “But the matter does not depend on the media only, but rather on the circles close to General Abdel Fattah al-Sisi,” which may influence the important decisions issued. He pointed out that “there are circles, not one circle around al-Sisi, and perhaps the most powerful of them is the GIS, headed by Major General Abbas Kamel, but there is also MIRA that cannot be ignored.” He considered that one of those circles that might determine who wins in that battle is the president’s office, headed by the powerful Major General Mohsen Abd al-Nabi.

Major General Abd al-Nabi is the director of the office of the current president of the republic and the former director of The Department of Morale Affairs in the Egyptian armed forces. The military source considered that Abd al-Nabi has media experience and he is unsatisfied with how the media is being managed. However, it should be noted that Abdel Nabi, although he is a member of the military establishment, was one of the strongest supporters of the ouster of Yasser Rezk, the Chairman of the Board of Directors of the Akhbar al-Youm Foundation, one of the most important MIRA men in the field of media.

On the other hand, the military source says that Abd al-Nabi was one of the supporters of the idea of ​​returning the Ministry of Information to Heikal. Therefore, Major General Abd al-Nabi’s status does not seem clear yet, but his status may largely determine who wins the media battle.