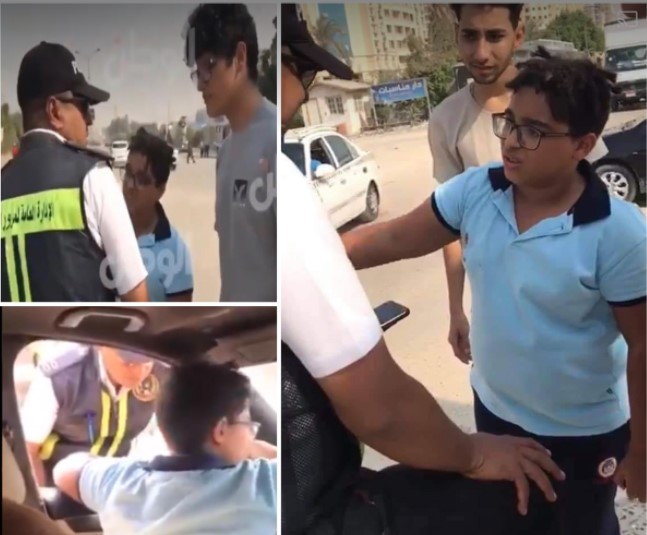 The law in Egypt does not apply except to the poor and those who do not have influence. As for those with sovereignty, authority, and prestige, the law cannot punish them no matter what they did. Opponents considered that this is the summary of the story of the judge’s son and the policeman in Egypt.

A few days ago, tweets were shared on social media platforms of a video clip of a 13-year-old boy driving a private car with his peers in the Maadi neighbourhood, south of Cairo.

The child in the clip was filmed by one of his friends who are sitting with him in the car mocking and assaulting a traffic policeman. In the clip the child moves quickly, causing the policeman to lose his balance and fall to the ground, which angered many who watched it, demanding that the child and his guardian be held accountable.

Observers expected that this child was the son of an official in Egypt, which was really clear later when the Public Prosecution issued a statement regarding the incident. The prosecutor claimed that the child stopped the car and apologised to the police secretary after mocking him. After the apology, it released him to his guardian, Counselor Aboul Majd Abdel Rahman.

Another video clip proved the prosecutor’s lie, as it showed that the child, Ahmed Aboul Majd, got out of the car with his friends, who filmed him as he continued to attack and assault the policeman, by punching him and threatening to beat him to death. The police secretary appeared afraid of the child after he told him of his father’s power and took the initiative to apologise and pledged to repair the mirror of the car that was damaged after colliding with him.

Son of the judge

Similar incidents of which have been repeated in the recent period, sparked a storm of anger and resentment in Egypt due to what the participants considered an abuse of power and influence and the complicity of the prosecution and the judicial authorities. The anger spread after it was proven that the prosecution’s claim that the child apologised to the police secretary was false, in addition to the circulation of another video clip some time ago that showed the judge insulting another traffic officer.

On social media, activists explained that the son of Judge Ahmed Abu al-Majd is well known as Harika, and he used to insult the police and drive his father’s luxury cars, despite the fact that he wasn’t at the legal driving age. Tweeters launched a tag in the name of Ibn al-Qadi (the son of the judge), through which they expressed their anger at what they considered the authorities’ double-dealing with the accused, especially since the father of the accused in the incident had a functional influence.

Others compared the police’s treatment of the judge’s son with its treatment of the children of the poor and the general public, especially since traffic officers and police secretaries deal with common car drivers with arrogance. For comparison, activists circulated a video clip of traffic officers catching a child driving a small vehicle known as a tuk-tuk to transport citizens, and the police confiscate the vehicle in light of crying and pleas from the poor child.

The surprising thing about the matter is that the judge’s son, after his release from the prosecution, appeared in a live broadcast via Instagram, accompanied by his friends, expressing his happiness at the increase in the number of followers of his account and directing insults and vulgar words to his critics. In the clip, the son of the judge said that no one could imprison him, which prompted pro-government media to attack him and demand accountability, explaining that the prosecution’s bias towards his father sparked a widespread wave of anger among citizens.

The new video clip and the widespread anger and dissatisfaction among the masses prompted the investigation authorities to arrest the child again and detain him and four of his friends. His father, the judge, issued a statement apologising to the people. The incident showed the enormous anger among Egyptians at the disruption of law enforcement principles and their dissatisfaction with some classes’ exceptional power, most notably those working in security, army, and judicial institutions.

The participants circulated a video clip some time ago of the former Minister of Justice, Counselor Ahmed al-Zind, in a media dialogue in which he emphasised that judges are masters and other people are slaves. The Harika incident comes a few weeks after the killing of the citizen Awais al-Rawi in Luxor Governorate by a National Security officer after he tried to dissuade the officer from arresting his brother. Instead of trying the killer, the prosecutor accused the dead man of carrying an automatic weapon with which he attacked the police.

School meals turn into a headache for the government and the...