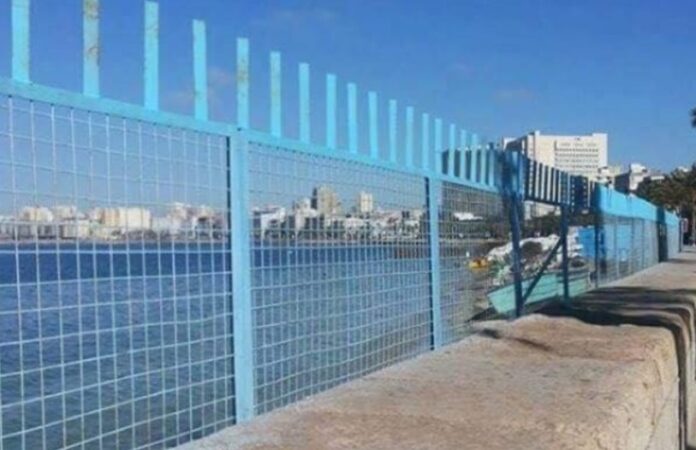 Residents of the city of Alexandria in northern Egypt are suffering from a major crisis after the army placed its hand on distinct areas on the corniche there and decided to convert them into investment places under the name of the Mustafa Kamel area development project, which was launched four years ago and will obscure the coast from the residents and whoever is passing through.

Work on the project is still ongoing, despite the massively popular and parliamentary objections, especially since work was carried out at night without prior announcement or a study of the environmental impact and the civilisational pattern of the project. In December 2016 the Alexandrian protest to oppose the project, which is implemented for the benefit of the General Administration of Clubs and Hotels of the Armed Forces, was unsuccessful.

The budget of the project, part of which has already been opened, is estimated at EGP 1 billion ($64 million), and it aims mainly to link hotels and beaches of the armed forces in the Sidi Gaber region together. The project includes a tourist and entertainment complex on the corniche beach, extending from Sidi Jaber (downtown) to the Roushdy area, with a length of about 900 metres. The project includes the construction of the Tulip 2 Hotel, which includes a multi-story garage in front of the beach, a bridge linking the project to the opposite side, through an isolated overpass, in addition to a tunnel linking the tourist complex in the Mustafa Kamel area to the hotel in the Rushdie area.

According to what the armed forces announced on the official page of the project on Facebook, it includes the largest group of specialised restaurants, international cafes, and the largest international clothing brands, in addition to a dolphin hall and rare fish. The project also includes a skating rink, a bowling alley, a dancing fountain, squash courts, a gymnasium, a gym, a marina for cruises, a school, a diving centre, a theatre, a garden for rare plants and places for fishing. It is noteworthy that the army owns 13 hotels and social clubs in Alexandria and three hotels bearing the “Tulip” brand, which belongs to the National Company for Hotels and Tourism Services, a member of the National Service Projects Organisation of the Armed Forces.

According to hotel reservation sites on the internet, the price of accommodation in the Mustafa Kamel Tulip Hotel is among the highest in Alexandria, as the cost of accommodation per night is $84 or the equivalent in Egyptian pounds. Although quite a bit of the project has already been completed, as the Sidi Gaber Bridge was opened more than a year ago and then several shops with the most famous international brands about two months ago, the whole project still represents a thorn in the heart of every Alexandrian.

Perhaps this anger is due to the feeling of the people of Alexandria about the usurpation of their city without their consent. No one from the governorate or the army assigned himself to conduct a community dialogue about the project before starting it. Rather they did not even bother to announce it before starting it, and the people did not know about the project until they were surprised on a cold morning in the Alexandria winter, with a choking crowd on the Corniche Road in the project area. The burial of some pedestrian tunnels that were located on the Alexandria Corniche also caused horrific accidents for those trying to cross the highway. Despite the completion of the Sidi Gaber Bridge and the achievement of a high percentage of traffic flow in the region, perhaps more than it was before the construction of the bridge, the state of anger and congestion did not subside among the people of the most famous coastal governorates in Egypt, because of the people’s feeling that the army is invading every detail of the economy and civilian life. And that civilians have become tenth-class citizens.

The armed forces have been attacking the beaches of Alexandria without finding anyone asking them to stop, as they previously cut off part of the corniche facing the 26th of July Hotel to establish a private beach for the hotel, as well as constructing a tunnel connected to the Mahrousa Hotel to transport the hotel’s guests through the corniche and enjoy the beach that was developed by filling parts of the sea, as well as leasing the Zizinia public beach and allocating it to guests staying at the Tulip Hotel. It is noteworthy that, apart from the concrete fences in the Mustafa Kamel development project, there are wire fences erected in other places where restaurants and cafes have been established in the Cleopatra, Camp Chezar, Bahri, and Mansheya areas.