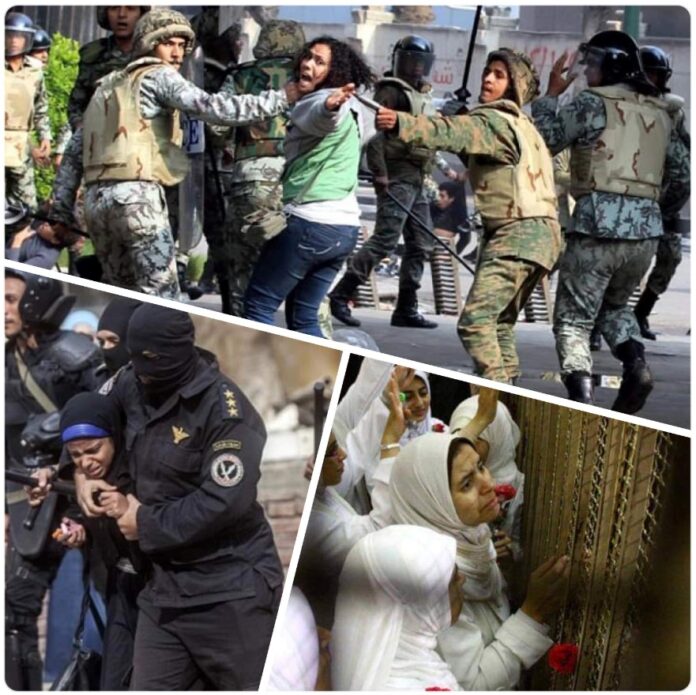 The Egyptian authorities and the Abdel Fattah al-Sisi regime have a record of repression and abuse against Egyptian women at all levels, and the regime does not prevent the brutal violations that testimonies reveal of horrific abuses of women.

In conjunction with this day, the platform We Record revealed the occurrence of several violations, the first of its kind in years, against female political detainees inside al-Qanater Prison for Women. They revealed that a force from the Prisons Authority, accompanied by the Prison Investigation Department’s head, entered the ward of female detainees pending political cases, and severely beat and dragged several detainees. According to the platform, the security forces also displaced five detainees to the criminal wards: Israa Khaled, Basma Rifat, Sumaya Maher, Nadia Abdel-Hadi, and Sarah Abdullah.

The force confiscated their medication, clothing, food, and drink from them, in addition to dragging and wounding the female detainees. Exercise was prohibited for the rest of the detainees. The human rights platform stated that the Prison Investigation Department’s head threatened the detainees and told them that he had the power to commit any violation against them.

Female opposition activists have long been subjected to violations and attacks in Egyptian prisons. Al-Qanater Women’s Prison in Egypt is known as a notorious prison in which female prisoners, especially female politicians, are subjected to continuous physical and verbal attacks upon direct order from the prison’s chief of investigations.

The Egyptian Commission for Rights and Freedoms said that the detainees demanded that the sick people inside the prison, which deserve treatment outside the prison hospital, be transferred and admission to outside hospitals expedited. The female detainees also demanded that the patients and pregnant women be transferred from the prison to the prosecution or court sessions in medically equipped cars and an independent medical committee be summoned to inspect the prison hospital and prove that they had been medically neglected.

This comes amid the al-Sisi regime’s praise, through its government statements, of celebrating and caring for Egyptian women and girls including by empowering them in higher and government positions. On the other hand, local and international human rights organisations reveal that the past years have witnessed widespread arrests and violations that have not happened before, affecting girls and women opposed to the ruling regime.

The oppression and violence that Egyptian women are subjected to did not stop at the ruling authority. Rather, it turned into a prevailing culture in society after the abuse of women was considered a red line. The forms of violence against women in Egypt have recently varied between sexual, physical, and psychological violence, harassment, honour killings, trafficking of women, in addition to bearing social and material pressures and burdens.

A study conducted by the Reuters news agency showed the aggravation of Egyptian women’s suffering, as it showed that Egypt fell to the bottom of a list of 22 Arab countries in terms of women’s rights. On November 25, 2019, the Central Agency for Public Mobilisation and Statistics announced that one out of every three women in Egypt had experienced physical or sexual violence.