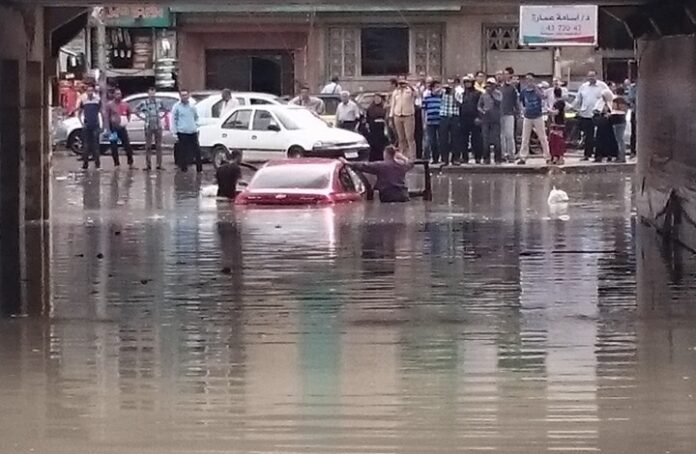 With the rains in the winter season, every year in Egypt, citizens and animals fall in the streets due to electric shocks from street lights and exposed electrical wires.

Death by electric shock has become a phenomenon associated with rain in cities and villages, amid apparent inaction of officials, an exchange of accusations, and a disclaimer of responsibility between the Ministry of Electricity and local agencies.

During the past two years, nearly 30 people were killed on rainy days from electric shocks from street lamps, in addition to many farmers’ livestock and stray dogs in the streets. A few days ago, during the rains, a child was killed after being electrocuted while walking on a street in Heliopolis.

A state of resentment and anger prevailed on social media in Egypt after a video clip from one of the surveillance cameras circulated in the streets showing an eight-year-old girl’s death after she was electrocuted. The girl who was killed by an electric shock on Belbeis Street, off Haroun Street in Heliopolis, is the daughter of the guard of a building in the area. Many wondered about the cause of this neglect, which kills dozens of citizens, especially children, annually.

Responsibility is lost between the Ministry of Electricity and Localities. Officials shirk the blame and exchange accusations with each incident. Immediately after the death of the girl in Heliopolis, an official in Cairo Governorate stated that the cause of the child’s death was the fall of one of the overhead electric cables in the neighbourhood, which led to the girl being shocked and dying instantly.

In a press statement, he added that all the existing electricity networks in Heliopolis are air cables, and are not in the earth. He pointed out that the North Cairo Electricity Sector affiliated to the Ministry of Electricity and Renewable Energy is responsible for these wind networks, not the neighbourhood. On the other hand, Elham Darwish, head of the Giza networks sectors of the South Cairo Electricity Distribution Company, stated that the localities and city agencies are supposed to maintain and follow up the lighting poles. Darwish denied responsibility, explaining that the poles do not belong to the electricity sector but rather to the localities.

During the rains, the cabinet and governors are content to warn citizens not to go out of their homes except for the most urgent necessity and advise them not to approach lighting poles and avoid walking in their surroundings. Using social media, activists accuse government agencies of failing to resolve the crisis every winter, as the government does not play any role in isolating lighting poles or take measures to protect the lives of citizens.

Activists explained that the lighting poles have become a terrifying specter and cause a state of panic among citizens whenever the rains fall, as parents fear for their children’s lives while they go out to the streets. According to the Ministry of Electricity data, more than five million electric poles cover the governorates of the Republic; most of them are dilapidated, without safety factors, because of direct wires on the outside.

People instead of government

In October of last year, MP Fayeqa Fahim said in a briefing request that electrocution incidents from street lights are not new for the winter season, it is something that happens every year. Still, the government and its concerned parties have not taken any notice. She noted the loss of many lives, most of them children, due to being electrocuted in addition to cattle. Simultaneously, popular campaigns were launched by citizens in different residential neighbourhoods to cover street lights with plastic pipes to save children’s lives.

On social media, citizens posted photos and clips of many young people in different governorates and cities while they were working to pay tribute to them and their efforts to protect lives. For its part, the Ministry of Electricity was satisfied with praising the experience of young people who cover street lights, stressing that it is a proper and appropriate procedure, as plastic is an insulating material that does not represent any danger when citizens touch it.

‘Regeni’s killer is unknown:’ What happened to the 5 who were...

Four years after the currency floating: The poor still pay the...