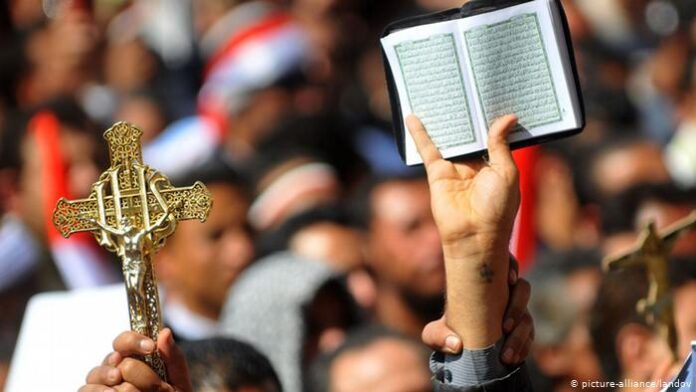 Egypt is witnessing signs of the resurgence of the crisis of sectarian strife again in Egypt between Muslim and Christian citizens. It is the bomb the ruling regime resort to threatening to detonate it to divert attention from its own failures, according to observers. In the previous clashes between Muslims and Christians in Egypt, the fingers of accusation point to the security services that ignite the fire of sedition for the goals that the authority seeks to achieve.

Clashes often flare up when some Muslims object to building a church in their area, or Copts are angry after an attack on a church or because of the marriage of a Christian girl to Muslim man, often in the governorates of Upper Egypt. During the past days, observers and many social media users have warned of signs of the emergence of sectarian strife again, in light of the al-Sisi regime’s efforts to distract citizens from their living and economic problems.

The first signs of the crisis began when many activists on social media shared posts of a Christian teacher in Ismailia Governorate named Youssef Hani described as insulting to the Islamic religion and the Prophet of Islam, the Prophet Muhammad. The angry people demanded that Hani be tried for his insulting the Holy Prophet. Indeed, he was arrested and interrogated, but the prosecution released him, claiming that he apologised for the abuse and what he wrote on Facebook. Hani’s speedy release angered many observers, as they compared the matter to similar incidents in which Muslim citizens were imprisoned, tried, and sentenced to imprisonment.

The matter did not stop at that; days after the Ismailia Governorate teacher’s incident, clashes erupted between Muslims and Christians in the Minya Governorate, against the backdrop of the circulation of an insulting publication of the Prophet Muhammad. Eyewitnesses said that a young Christian was involved in insulting the Prophet Muhammad through Facebook, which angered the people of al-Barsha village in the city of Mallawi in the Minya Governorate. The matter worsened after the two sides threw stones and Molotov cocktails, according to video clips circulated by activists on social media.

Security forces were deployed in the village streets, dispersing many residents using tear gas canisters, and arrested eight suspected of provoking the people. According to specialists, there are many sectarian clashes in Upper Egypt, while the security services resort to sedatives to calm the crisis without finding radical solutions to it. The sectarian strife began to be repeated, starting with the Khanka incident in 1972, and continuing with the al-Zawiya al-Hamra incident in 1981. According to observers, since 1972, there have been hundreds of declared and undeclared sectarian incidents, large and small. Each time, the issue is addressed with painkillers without looking for the real causes.

Copts often accuse the ruling regimes of persecuting them and exposing them to racial discrimination, especially in senior leadership positions in the country. On the other hand, Muslims accuse the Copts of bullying them using foreign countries, citing what Egyptian Christian groups are doing in the diaspora claiming that the Arabs and Muslims occupy Egypt.

Away from mutual accusations, the most prominent accusation remains against the ruling regime and state institutions of being involved in fueling discord and not treating the societal problem with categorical solutions, but rather its involvement in starting these fires. After the January 25, 2011 revolution, leaked documents revealed the Ministry of the Interior’s involvement, led by former Minister Habib al-Adly, in the bombing of the Church of the Saints in Alexandria to fuel conflict and occupy public opinion.

Human rights organisations believe that the state does not address the causes of sedition systematically or ideologically, but rather it is content to hold customary sessions between Muslims and Christians in every problem and pressure the conflicting parties to concede. The Egyptian Initiative for Personal Rights issued a report on those customary sessions under the title, ‘A study on the role of customary sessions in sectarian conflicts and state responsibility.’

In its report, the organisation monitored 45 sectarian incidents from January 2011 until the end of 2014, as examples and not an accurate count. The foundation attributed the state’s resort to such customary sessions to its institutions’ weakness and its inability to fulfill its function in protecting community peace and citizens’ lives and properties.