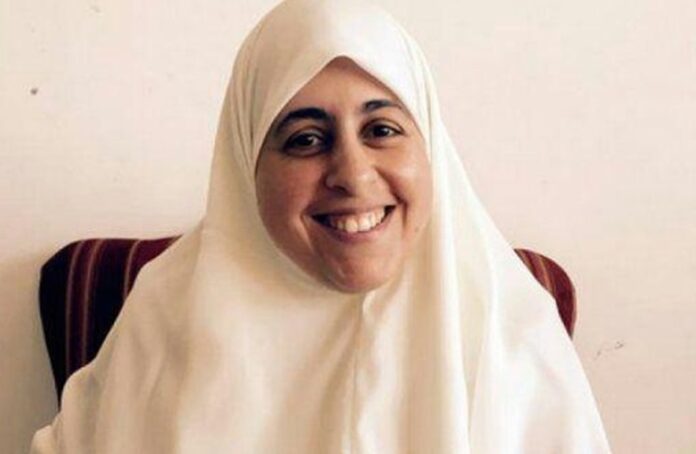 “Aisha Al-Shater takes her medication and is in a stable condition and recovering. She also takes expensive treatment and an injection worth EGP 5,900 every two weeks.” With these words, Dr. Salah Salam, a member of the National Council for Human Rights, violated Aisha’s rights. Egyptian law stipulates that the patient’s privacy must be guaranteed in all stages of his treatment, and the patient’s dignity must be guaranteed at all stages of medical treatment.

Human rights activists say that Salem violated Aisha’s rights twice, once by publishing private information she did not authorise about her treatment, and again by showing the treatment she received as if it was pity or charity, not her right. Human rights defenders refer to Aisha as one of the cases of revenge against opponents’ families. Khairat al-Shater (Aisha’s father) is the deputy guide-general of the Muslim Brotherhood, the country’s largest opposition group. Salem’s statements came after an alleged visit by the council’s delegation and some civil society organisations to Qanater al-Khayriyya prison. Observers say that the National Council for Human Rights has transformed from a tool to monitor the Egyptian authorities to a means of polishing the face of the regime. Salem said: “We visited the prison hospital, and personally, I looked at some of the medical files of Aisha Khairat al-Shater and Hoda Abdel Moneim.”

The health of human rights lawyer Hoda Abdel Moneim has “deteriorated” in Egypt’s al-Qanater prison, according to her husband, Khaled Badawy. He added: “Aisha al-Shater takes her medication, her condition is stable and recovering, and she also takes expensive treatment and an injection worth EGP 5,900 every two weeks. Hoda Abdel Moneim suffers from some problems with weight gain and an increase in cholesterol levels.” However, he admitted that the delegation did not visit the wards. Its follow-up was limited to the prison facilities and they met workers in the workshop, not political detainees or the outpatient clinic inmates. Human rights activists mocked the visit, which did not include the detainees.

An Egyptian human rights defender from Cairo told Egypt Watch that the Human Rights Council visited facilities and buildings and viewed papers and files, but did not meet the people who live inside the prison. The Egyptian human rights defender, who requested anonymity, mentioned that the Human Rights Council made a previous comedic visit that showed Egypt’s dark prisons as five-star luxury resorts. On that visit, police officers appeared grilling meat, claiming that it was intended for prisoners. Egyptian activists linked these scenes with similar scenes in an old satirical movie that captures how to deceive a human rights delegation.

According to statistics from human rights organisations during 2020, at least 73 Egyptian detainees died due to medical negligence, while the Egyptian authorities do not announce reliable official details. Last December, the Egyptian Ministry of Interior admitted that the detainee, Aisha, the daughter of the detained Muslim Brotherhood leader, Khairat al-Shater, had been transferred to the hospital. Still, it denied news of her deteriorating health.

Egyptian media quoted a security source saying that Aisha was in the prison hospital pending a case, claiming that she had a medical history before her arrest. He added, “A treatment plan has been developed for her from the date of her deposit by the treating physicians, and her case is monitored periodically. The latest analyses and examinations conducted for her have shown that the vital signs are within normal limits, and the general condition is stable.” He also claimed that she “consumes healthy foods prescribed for her according to her treatment programme, in addition to what she receives from her family in accordance with the rules in this regard.” But he did not explain the reason for her transfer to the hospital if her condition was normal, as he claims.

The source considered that the news that had spread about Khairat al-Shater’s daughter’s deteriorating health comes within the framework of the Muslim Brotherhood’s approach to spreading lies and rumours and trying to incite public opinion. The Egyptian regime has always denied the deterioration of any detainee’s health, including the late President Mohamed Morsi, who died during his trial session after repeatedly complaining about his deteriorating health.

Aisha’s family had previously accused the Egyptian authorities of causing her health to deteriorate inside the prison after it was confirmed that she had a spinal disease. They said that he came to her because of her extremely poor detention conditions in a solitary cell without a bathroom, lighting, or windows. Aisha was arrested on November 1, 2018, when she was 39-years-old, with at least 18 others, including her husband, Muhammad Abu Hurairah. On 21 November 2018, she appeared before the Supreme State Security Prosecution and was held in pretrial detention, pending an investigation for “belonging to a terrorist group.” Since then, the prosecution, and later a judge, have renewed her detention in semi-automatic hearings.

Aisha al-Shater, in connection with Case No. 1552 of 2018, was also issued a Supreme State Security restriction with nine other defendants on the grounds of accusing them of joining a banned group and receiving funding for a terrorist purpose. On August 18, 2019, Aisha began an open hunger strike to reject violations in al-Qanater prison and protest against what she is being exposed to inside prison and not observing the most basic human rights.

Al-Sisi is taking advantage of the conflicts in Eastern Mediterranean to...