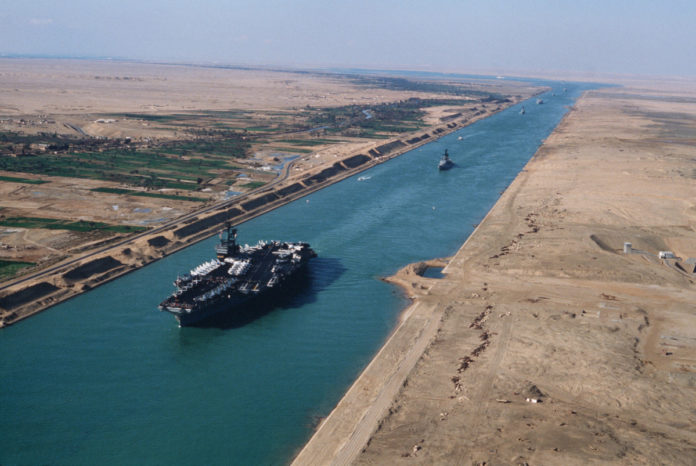 The Suez Canal Authority has announced that the volume of the canal’s revenues during the year 2020 amounted to $5.61 billion, down from $5.8 billion in 2019. This statement means that the canal’s management acknowledged a three per cent decline in revenues compared to 2019. This statement coincided with the announcement of another blow to the Egyptian economy. The number of tourists arriving in Egypt decreased by 70 per cent during 2020, recording 3.6 million tourists, compared to about 13 million tourists in the previous year.

The Suez Canal revenues are one of the main pillars of the Egyptian economy, as well as one of the main sources for obtaining foreign exchange currencies, in addition to tourism, exports, and remittances from Egyptians working abroad.

The head of the Suez Canal Authority, Major General Osama Rabie, said that it had been decided to fix fees for all types of vessels transiting the canal in 2021, as well as to renew all the incentives and cuts that were decided in 2020 for some classes of ships. Rabie attributed the decline in revenues to the global economic slowdown caused by the coronavirus pandemic. The Canal Authority has approved several ship cuts as part of the efforts made to deal with the unfavourable conditions and the unprecedented challenges imposed by the emerging coronavirus pandemic. Despite the decline, Rabie considered that the results of last year are a successful model in how the Suez Canal can manage crises, as the authority succeeded in maintaining the numbers and tonnage of ships crossing the canal at normal rates and keeping the revenue generated at a level close to the revenues achieved during 2019.

The Suez Canal is the shortest road linking the East and the West, and it has great economic and strategic importance. The Egyptian state pays wide attention to the Suez Canal Corridor development project, saying it is one of the most critical national projects that will attract more investments and transform Egypt into a global economic centre. But after spending billions of dollars and claiming the new project would double revenue, the Suez Canal has yet to achieve any of this.

According to the strategic plan, the canal aims to double the number of passing vessels and revenues by 2023, which was confirmed by the former head of the canal, Lieutenant-General Mohab Mamish, during his speech on the third anniversary of the opening of the new canal two years ago. Lieutenant General Osama Rabie, the current president of the canal, reaffirmed those goals last August. But observers say that in light of the decline in the Suez Canal revenues and the lack of implementation of clear projects that achieve that goal, this goal seems far-fetched.

Most of the tourists who came to Egypt (2.5 million tourists) came last January and February, before the (COVID-19) pandemic caused a complete halt to travel between March and July. Since travel resumed in early July, only 1.1 million tourists have visited Egypt. It is noteworthy that the main countries exporting tourists to Egypt, such as Germany, Britain, Italy, and Spain, have not yet resumed their trips to Egypt, due to the circumstances of coronavirus and the emergence of the second wave, which made many of those countries issue decisions to completely close and prevent their citizens from travelling for tourism outside Europe, after the high infection rates.

The Egyptian external debt achieved continuous booms after the army seized power in July 2013, reaching $123.5 billion at the end of June 2020, compared to $43.2 billion at the end of June 2013. These numbers mean that the Egyptian external debt recorded an increase of $80.3 billion in seven years, with a growth rate of 186 per cent. While most countries have resorted to disbursing aid to their people in light of the economic crisis caused by the coronavirus, the Egyptian regime has admitted to keeping fuel prices above its real costs and price to collect more money from its people.

While already in prison the Vice President of the Strong Egypt...

The future of Egyptian dissidence after the National Accord Document