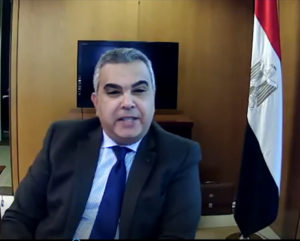 On Friday, the Egyptian ambassador to Washington, Moataz Zahran, called on the United States to intervene to save the stalled Grand Ethiopian Renaissance Dam (GERD) negotiations, considering that it is the only one capable of achieving a breakthrough.

Zahran’s call came in an article published in the American magazine Foreign Policy, entitled “Only Washington can save the Renaissance Dam negotiations now.”

Zahran said, “Ethiopia has thwarted another mediation process, this time led by the African Union, to resolve an escalating crisis on the Nile River, as Ethiopia is building the huge Renaissance Dam, which would impede a major source of water for Egypt and Sudan.” He added, “With Ethiopia approaching the implementation of the second filling of the dam reservoir from one side, and thus crossing the (red line) set by Egyptian General Abdel Fattah Al-Sisi, there is a need for US mediation to reach a peaceful solution to prevent unrest in the region.”

Earlier this month, the United States appointed veteran diplomat Jeffrey Feltman as a special envoy to the Horn of Africa and assigned him several tasks, including addressing the dispute over the Renaissance Dam. Zahran added, “Currently, 50 per cent of Egyptians live below the water poverty line due to the lack of annual rainfall, and thus filling and operating the dam unilaterally, which may result in incalculable social, economic and environmental damage in Egypt and Sudan.”

In the most explicit threat since the outbreak of the crisis 10 years ago, Sisi said, on March 30, that “the waters of the Nile are a red line. We will not allow any prejudice against our water rights. Any prejudice to Egypt’s water will have a reaction that threatens the stability of the entire region.” On Wednesday, Egyptian Foreign Minister Sameh Shoukry said, in a parliamentary hearing, that Ethiopia “refused mediations to solve the Renaissance Dam crisis,” without naming the parties to those mediations.

The Ethiopian Minister of State for Foreign Affairs, Radwan Hussein, said, during a briefing that he gave to the ambassadors of Asian countries in Ethiopia, Egypt “continues to present its irrational claims over the Renaissance Dam.”

Al-Sisi launches the second stage of the Decent Life initiative… What...