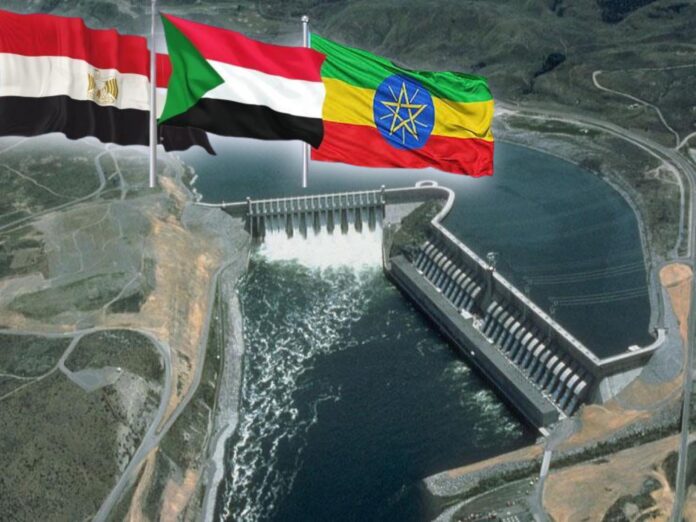 It seems that Ethiopia is determined to continue filling the Renaissance Dam, the largest hydropower project in Africa, despite its ongoing dispute with Egypt and Sudan.

Ethiopian authorities announced that threats issued by the two downstream countries – Egypt and Sudan – concerning the Grand Ethiopian Renaissance Dam are repeated and futile. This was stated in the words of Dina Mufti, the Ethiopian Foreign Ministry spokesperson in press statements. Mufti said that since the beginning of the dam constructions, “we have heard a lot of threats – they said that they will strike, while it was a long shot.” Mufti added that it’s unfair to accept the historical treaties of water distribution that includes fixed quantities for Egypt and Sudan in reference to the treaty of the 1959 Egypt-Sudan Nile waters agreement, which allocated the historical water shares among the Nile basin countries.

The treatment was made to divide the water shares between Egypt and Sudan which is 74 bcm in total at 55.5 bcm annually for Egypt, and 18.5 bcm for Sudan. Mufti mentioned that there are some parties that don’t accept any role for the AU, as he affirmed that the conflict must be resolved among the three concerned parties. Also, the negotiation at this time will be about the filling, while the water sharing will be in another negotiation round.  Mufti accused Egypt and Sudan of prolonging the negotiations in the last period, as well as accusing the two countries of not wanting the AU to succeed in completing the negotiations about the dam.

In the same context, last Sunday, the Ethiopian Minister of Irrigation and Energy, Selechi Bekele, said that the Renaissance Dam is a right for his country to develop freely and there is a conspiracy to thwart the construction of the dam and to undermine the existence of his country. He stressed that all Ethiopians must unite and stand together to face the main challenges facing their country today to build the dam and relieve themselves of poverty.

The Egyptian Prime Minister Mostafa Madbouly said that his country, with all its devices, is intensifying efforts to confront the dam crisis, stressing that Egypt will not give up a single drop of its share of the Nile water. Madbouly added that the concerned authorities and ministries are exerting double efforts to preserve Egypt’s water resources as Egypt is one of the top countries that preserve and maximise their water resources.

During a meeting of the foreign affairs committee of the Egyptian Senate, the Egyptian Foreign Minister Sameh Shoukry, said that the Renaissance Dam crisis faces Ethiopian “intransigence,” stressing that Ethiopia has rejected all international and other mediation to resolve the crisis. Shoukry indicated that his country is classified among the countries that suffer from water poverty, revealing that the Egyptian citizen’s share of water is within the limits of 600 cubic metres per year, while the water poverty standard is 1,000 cubic metres per year.

The Egyptian Ministry of Irrigation in turn warned of suffering and a situation that will worsen for the two downstream countries, with the second filling of the Ethiopian Renaissance Dam in the event of a low flood. This came in a statement by the ministry last Monday, responding on the Ethiopian side, on Sunday, to opening the low exits of the Renaissance Dam. This is a prelude to drying the central part of the dam to start the ramping work to implement the filling process for the second year of the dam.

It comes after the announcement of the Ethiopian Minister of Irrigation and Energy, Selechi Bekele, on Sunday, that construction and operation of the two bottom outlets has been completed and is ready to pass the Blue Nile drainages to Egypt and Sudan at any time. In the same context, Khartoum said that it is in the process of filing lawsuits against the Italian executing company and against the Ethiopian government over the dam. Mufti responded during the press conference that Sudan’s submission of a complaint will not help, and “we do not know the nature of the accusation directed against us.”

Last Saturday, the Ethiopian National Council declared that Addis Ababa will carry out the second filling he next summer as scheduled. He accused local and foreign forces of threatening the security of his country to plunge it into chaos and conflicts, in his words.   This came during a session held by the council in the presence of Prime Minister Abiy Ahmed, after Ethiopian insurgents controlled areas in the Benishangul region, where the Renaissance Dam is located. Ahmed confirmed that Ethiopia will implement the second filling of the Renaissance Dam on time despite pressures and conspiracies.

Observers see the recent statements as a fundamental political shift in the issue of the Renaissance Dam, as it made Ethiopia take control and dominate proceedings and establish itself as a sole rapporteur for all the issues related to the Ethiopian Dam.

The current developments began to escalate after the announcement of the failure of the Kinshasa Renaissance Dam negotiations, which were held at the beginning of this month in the Congolese capital, as part of the negotiations supervised by the African Union to bring the views of the three parties closer together, which had not stalled for 10 years. For Ethiopia, the second filling means the dam’s lake would be filled in July as scheduled. On the other hand, it means the efforts to mobilise public opinion in the two downstream countries face all possibilities arising from the failure to reach an agreement. It should be mentioned that the Egyptian president affirmed, in ramped up rhetoric concerning Cairo’s options against the dam, that Egypt’s water is a red line, and if one drop decreases, the region will enter a state of instability that no one can imagine.

The statements were followed by ratifying three military protocols with three African countries including Burundi, Uganda, and Sudan as the Egyptian army implemented military maneuvers with them a month ago. However, Ethiopia announced at the time that it’s going ahead with its procedures towards the process of the second filling. Then it was followed by tripartite negotiations under the supervision of the AU in the Congolese capital, which declared their failure as mentioned above.

Thus, the Ethiopian Renaissance Dam issue, which Addis Ababa is about to complete, remains a dispute between the three countries, which have been engaged in stalled negotiations for about 10 years.

Boycotting the army’s companies: Could the Egyptian economy be liberalised?