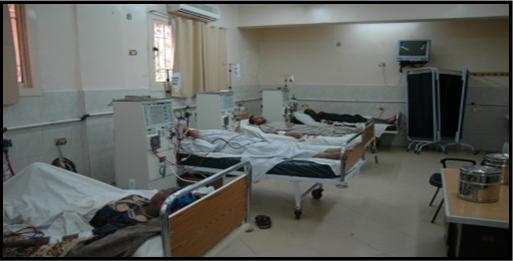 The Egyptian Ministry of Health announced that it had recorded 66 deaths and 1,132 cases of coronavirus in the last 24 hours. These figures represent a new increase in the number of new infections officially registered with COVID-19. These rates come amid fears of a large-scale outbreak of the virus, as is taking place in Sohag Governorate, which has come to be described as the Egyptian India.

Ministry spokesman Khaled Mujahid said in a statement that the total number of deaths due to the virus in the country reached 13,845, while the total number of infections reached 236,272. The Egyptian Minister of Health, Hala Zayed, announced that additional precautionary measures would be taken against corona, with quarantine at all entry points into the country, in conjunction with the emergence of new virus variants.

Eyewitnesses told Egypt Watch that hospitals in the governorate of Sohag, which is located in southern Egypt on the banks of the Nile, was overwhelmed with coronavirus patients. They emphasised that the province has become another major hotspot for corona cases inside the country.

Doctors in Sohag warn that the governorate’s health system could collapse, even as the government moves to push for new supplies. The head of the governorate’s Doctors Syndicate, Muhammad Fahmy Mansour, said that “We lost five doctors in one week.” Mansour added: “The India scenario was possible, but God willing, the possibility of that has become very far now,” according to what was reported by the Associated Press.

The Egyptian government showed great reluctance to impose new closures, then on Wednesday imposed the most stringent restrictions to reduce the infection rates inside Egypt. The government ordered cafes, restaurants, and shops to close at 9 pm. It also banned large gatherings for two weeks, in addition to closing beaches and parks during the Eid Al-Fitr holiday.

At the end of last month, the Egyptian Minister of Health denied the validity of reports indicating the deterioration of health conditions in Sohag Governorate due to the high number of coronavirus infections. Zayed said, “I went at the head of a delegation last week to Sohag and the other governorates, and the situation is different from what some say, and the teams are already there.”

The high number of new cases in Sohag governorate raised concern about a third wave of the epidemic in Egypt. The regime lifted most of the precautionary restrictions imposed on movement and other measures after last summer’s wave.

Corona infections in Egypt have reached about 234,000 since the outbreak of the virus in China in 2019, while the number of deaths has reached 13,000. Experts say that the official infection figures in Egypt reflect only a fraction of the actual cases. The level of examinations and tests is relatively low, and special tests are not included in government statistics.

Egypt declines by 23 points on Bloomberg Index of confronting COVID-19...