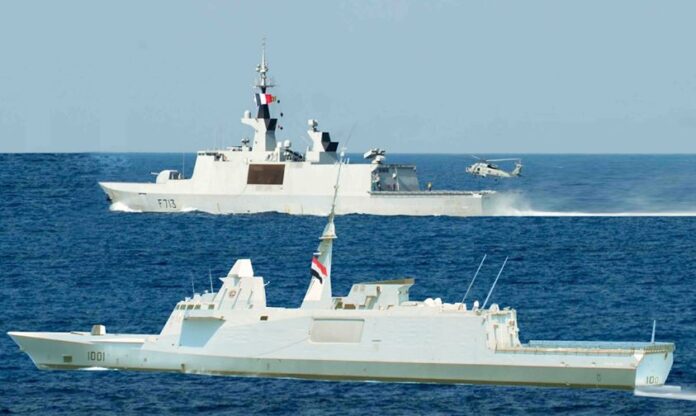 The Egyptian and French naval forces carried out transient naval training within the southern fleet, and air force personnel from both countries carried out a joint exercise at an Egyptian air base.

According to the Egyptian military spokesman on Facebook: “The naval forces provided transient maritime training with the participation of the Egyptian frigate Sijm Al-Fateh and the combat group accompanying the French aircraft carrier Charles de Gaulle.” He explained that this is within the scope of the theatre of operations of the Southern Fleet. The training included the implementation of many joint training activities that achieve maximum benefit for both sides. He added that this training came in conjunction with implementing the Egyptian and French air forces joint training Ramses-2021.

The training included implementing many training activities and joint air sorties, with the participation of a group of the latest models of multi-role fighters for both sides. According to the same source, these exercises support the pillars of cooperation between the Egyptian and French armed forces. He pointed out that it comes to support special efforts to benefit from bilateral capabilities to achieve the common interests of both sides and support security and stability efforts in the region.

The two are training days after Egypt signed an agreement with the French government to purchase 30 Rafale aircraft through a financing loan with a minimum duration of 10 years.

In 2015, Egypt and France concluded a contract to supply 24 Rafale aircraft for the Egyptian Air Force.