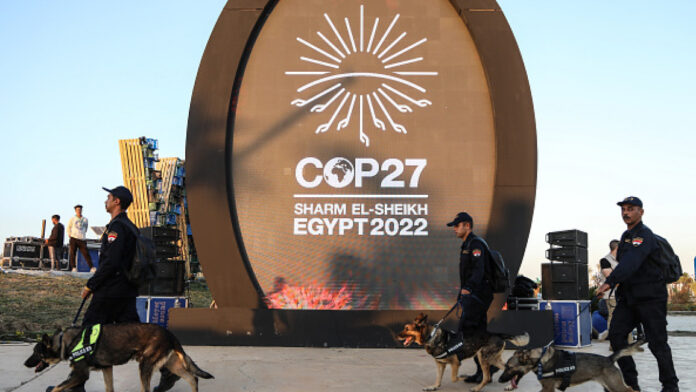 On Monday, Reuters reported that German police had warned their country’s delegation to the COP27 climate conference that they might be vulnerable to spying by Egyptian security. The German police had told delegates that Egyptian agents might record their conversations and that people close to the Egyptian government might try to disrupt events “through provocative actions.” Two German participants have noticed suspicious movements, including being stalked and photographed, at events. They also said they were subjected to verbal warnings from other participants about possible surveillance.

The Associated Press has said the United Nations is investigating allegations of misconduct by Egyptian police officers involved in securing the conference. On Tuesday, UN security personnel expelled an Egyptian parliamentarian from a press conference for Sanaa Seif, sister of imprisoned Egyptian-British activist Alaa Abdel Fattah, after he verbally assaulted her.

At the conference held on the sidelines of the COP27 climate summit, Seif spoke about her brother, who has been on hunger strike for seven months, stressing that his life is in danger and that his family has not known about him for weeks. Amr Darwish, a deputy in the Egyptian parliament, criticized Seif, saying, “You are trying to seek help from the West to pressure the Egyptian government. This is unacceptable interference in Egyptian affairs.” Darwish accused Abdel Fattah of insulting the Egyptian government, army and state, adding that he must be punished for that. When Seif tried to respond to him, Darwish continued his verbal attack on her and the rest of the speakers next to her on the stage before the UN security men asked him to leave the room.

Egypt: Inflation hits 12.1, exceeding the target of the Central Bank...