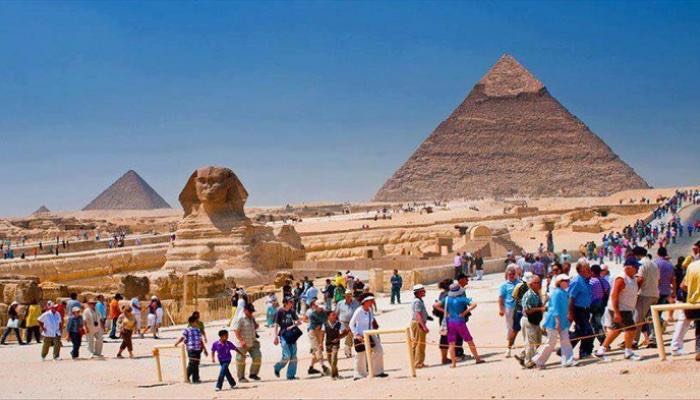 Egyptian tourism reservations decreased by 80% compared to the same period last year, following the blow that the tourism sector in Egypt received from the new Coronavirus. Former undersecretary of the ministry of tourism and head of the hotel control sector Ahmed Attia revealed that canceling reservations had already started because of Corona, most of them in the short term in this March and April. He said that these cancellations came from four important markets, including Germany, Britain, and Greece. Attia added that tourism companies will be severely affected if the crisis persists, and no fines can be applied to cancel reservations because the epidemic is global, indicating that the tourism sector will bear it entirely. On the extent of the damage, Attia stressed that it is premature to talk about any numbers, especially with the age of the crisis not being determined, adding: “But there are repercussions that tourism and aviation companies have begun to suffer from and the related tourism industries also.” Meanwhile, the head of a tourism company, Karim El-Menbawi, expected that the sector in Egypt would be severely damaged by the virus. He revealed that they had received reservations representing only 10% of what they were planning.

A member of the South Sinai Tourism Investors Association, Atef Abdel-Latif, said that “Corona” had a great impact on travel rates for tourism, noting that there are fears in the Egyptian tourist sector from the impact of reservations for the Spring Festivals, which the tourism sector depends heavily on in reviving the occupancy during March and April. Member of the General Assembly of the Chamber of Tourism Companies Sabri Yeni added that many tourism companies in a number of European countries such as France, Britain and Ukraine canceled their reservations to the Egyptian tourist cities during February and March. He pointed out that a number of hotels in Sharm El-Sheikh closed their doors temporarily, after canceling these reservations and the absence of customers. Tourism experts also confirmed the abolition of many bookings from several European countries, amid fears of the negative effects of the virus on the tourism sector, which began to recover relatively recently and achieved 12.6 billion dollars in revenue last fiscal year. Although the spread of Corona has not been announced in Egypt, the global state of caution and quarantine will affect the flow of tourists to all countries of the world, especially countries that depend on Chinese tourism.

Egypt relies on tourism as one of the important sources of foreign currency, a sector that has experienced many troubles during the past ten years. At the Pyramids of Giza (west of Cairo), tour guides and souvenir sellers said that work had slowed in the last month due to concerns about the Coronavirus. Ali Hamouda Hassan, who sells tourists on horseback trips around the pyramids, said that “he was visited by three or four customers every day and, now, one customer every two days.” Concerns increased in the tourism sector, after a proposal submitted by Egyptian Member of Parliament, Suleiman Fadl Al-Omari, to Prime Minister Mustafa Madbouly and Minister of Tourism and Antiquities Khaled Al-Anani, asking them to announce the suspension of tourism coming to the country for a period of one month. He said that this is a necessary precautionary measure to prevent the spread of the new Coronavirus in Egypt, especially since it has been proven with clear evidence that foreigners coming from abroad are the cause of the spread of infection inside. Al-Omari said that foreign tourists are the direct cause of all injuries inside Egypt, which necessitates taking this precautionary measure so that the decision to suspend foreign tourism includes all foreigners working in some Egyptian companies, who are currently in their countries. In practice, this proposal means the displacement of workers in the tourism sector, in addition to huge economic losses. Observers view this proposal as also useless because even if the virus infection is coming from abroad, it is now widespread among Egyptian citizens. As evidence, the countries that placed restrictions on travel to or from Egypt increased, as Saudi Arabia and the Sultanate of Oman joined Kuwait and Qatar in restricting travel coming from Egypt. Both Bahrain and Oman called for the residents coming from Egypt to isolate themselves locally for two weeks from the date of their return, according to what the ministries of health of the two countries announced.

On the other hand, the Ministry of Tourism has contracted with an international company to implement a major promotional campaign for Egypt abroad next week. The campaign targets 10 to 12 markets in the main countries exporting the tourist traffic to Egypt, including England, Germany, Italy, and the United States, according to the head of the Tourism Promotion Authority, Ahmed Youssef, in press statements. EgyptAir also announced that it will waive the fees for changes to international flights linked to its change from the Coronavirus, starting from Saturday to the end of the month, regardless of the date of travel. Egypt has so far announced 59 cases of corona infection, at a time when several countries have announced the appearance of about 30 cases of the virus, for people who were in Egypt. As a result, the Egyptian government decided to suspend all activities that require large gatherings of citizens, and the Ministry of Interior announced the suspension of visits to prisons for a period of 10 days, as a precaution.