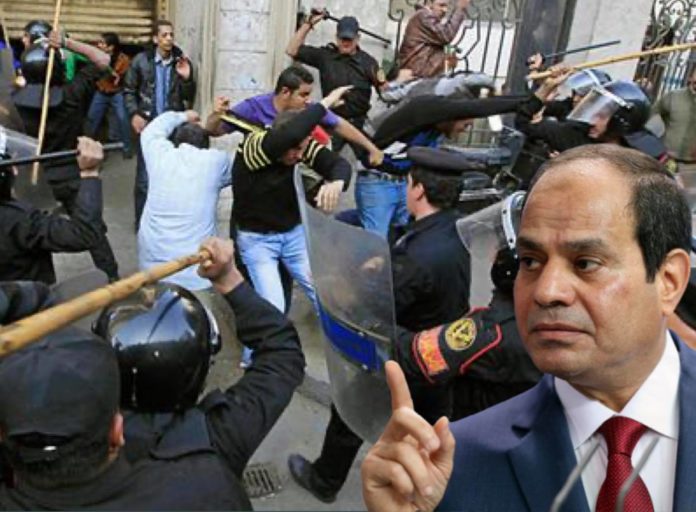 General Abdel Fattah al-Sisi never misses a chance to promote the oppressive regime he built since assuming power six years ago. In the middle of the coronavirus (COVID -19) pandemic, which infected about 11,000 people and cost the lives of 571 in Egypt, al-Sisi’s regime has modified the emergency law to give him and security bodies new repressive powers. The government stated that the modifications are related to the health emergency conditions such as the outbreak of coronavirus. In fact, only five of the 18 modifications approved by the parliament are clearly related to public health. Including them as a part of emergency law means that authorities can impose such measures whenever it declares the state of emergency, whether there is a health emergency or not.

The pandemic as a justification to expand oppression

Human Rights Watch has criticised the approval of the Egyptian parliament of the modifications of emergency law / 1958 proposed by the government. Joe Stork, the deputy director of the organisation’s Middle East and North Africa regional office, said that: “President al-Sisi’s government is using the pandemic to expand, not reform, Egypt’s abusive Emergency Law. Egyptian authorities should address real public health concerns without putting in place additional tools of repression.”

Egypt has been under a nationwide state of emergency since April 2017. The Emergency Law (Law 162 of 1958) gives security forces wide powers to detain indefinitely and interrogate suspects with no judicial control. Also, the law authorises mass surveillance and censorship, seizure of property, and forcible evictions, all without judicial supervision, which contradicts international law which provides for rights such as the right of fair trial and that the judicial review of detention cannot be limited even in times of emergencies.

The new amendments give the president, without requiring him to reference any public health emergency, expanded powers to shut schools, universities, courts, government facilities, and completely or partially shutdown public and private institutions. One of the amendments would allow him, even in the absence of any public health purpose, to restrict “public gatherings, protests, rallies, festivities, and any other form of gathering, including private gatherings.”

Article 3 of the Emergency Law (Law 162 of 1958) included the proposed amendments that allow the president to implement thus overwhelming measures to “preserve security and public order.” Article 3 also allows the president to order these measures verbally but requires him to issue them in writing within eight days.

Also, the amendments may lead to broadening the powers of military courts to prosecute civilians by giving military prosecutors the power to investigate incidents when the army officers are tasked with law enforcement or when the president so orders.

A permanent state of emergency

Egypt has been subjected to the state of emergency for most of the past 40 years, since 1981, with a few months of interruption, mainly between 2012 and 2017. Successive governments have ignored calls to reform the law and used it to crush the peaceful opposition, and labelled peaceful opposition gatherings and protests as national security threats.

Under Article 154 of Egypt’s 2014 constitution, the president, with parliamentary approval, can declare a state of emergency for up to three months, with three-month extensions if approved by two-thirds of the parliament. However, al-Sisi issued 12 extensions to keep the imposed state of emergency since April 2017. On April 28, the last decision was issued, and the parliament, controlled by intelligence agencies and dominated by al-Sisi’s advocates, approved it with no opposition.