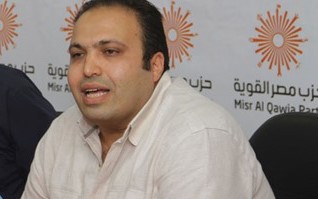 Egyptian have authorities included the prominent activist and vice president of the Strong Egypt Party, Muhammad Al-Qassas, in a new (third) case. The Supreme State Security Prosecution (SSSP) ordered al-Qassas’ detention on the same accusations he faced in two previous cases. He got judge orders to be released from both of these cases.

Iman al-Badini, al-Qassas’ wife, said that she was surprised that Egyptian authorities had referred her husband to the SSSP for investigation in connection with Case No. 786 of 2020. She confirmed that the SSSP directed the same charges again to her husband as he faced under Case No. 1781 of 2019, from which he was released by a decision from the Criminal Court last Wednesday. Al-Qassas’ release came after more than two years in pretrial detention, which is the period specified in the law for pretrial detention.

Al-Qassas was arrested on February 8, 2017, and included in Case 977 of 2017, known in the media as Mekamaleen 2, in which he faced charges of participating with a group established in contravention of the law, inciting against state institutions, and publishing false news. On December 9, 2019, the Public Prosecutor issued a decision to release al-Qassas, after 22 months of pretrial detention. After stalling, on January 21, 2020, a decision was issued by the Supreme State Security Prosecution to imprison him for “retribution” for 15 days, pending a new case, No. 1781 of 2019. The prosecution charged him with the same charges as in the first case.

Al-Qassas is considered one of the most prominent young Egyptian politicians of the last decade. He was a member of the Muslim Brotherhood until a decision was issued to dismiss him in June 2011, shortly after he founded the Egyptian Current Party. Later he joined the Strong Egypt Party, which was founded in July 2012 by Abdel Moneim Abul-Fotouh, the presidential candidate and current political prisoner. In addition to his pretrial detention and his rotation in several cases, Egyptian authorities added him to the list of terrorist figures who have been banned from travel and have had their money confiscated.