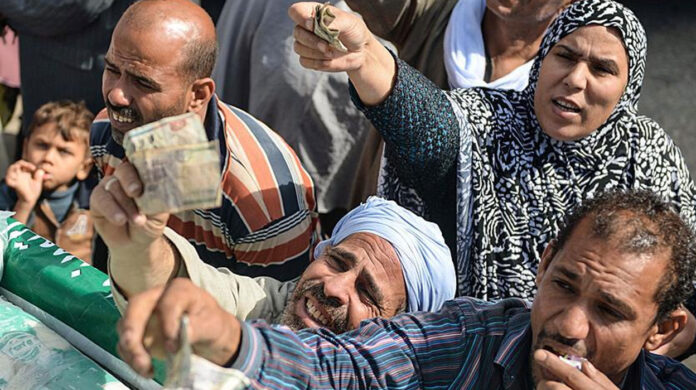 For the Egyptian citizen, going to a government agency to obtain papers is considered a form of severe suffering. This mission is preceded by anxiety about his success in completing it, as he often returns home after failing to achieve his goal. Extended queues, waiting for hours, crowding, quarrels between citizens and the intransigence of employees. This is the frequent scene daily in post offices, real estate offices, the civil registry, traffic departments, courts, tax, and insurance departments.

Social media is full of complaints from citizens. Most of them have tweeted about the suffering they face inside government institutions. Many activists and politicians called for reform and the restructure of the state’s administrative apparatus, wondering where the electronic and technological development the government promotes is.

The crises of government institutions and interests have accumulated for years without a solution. Everyone talks about red tape in government agencies, the poor performance of employees, and fleeing during official working hours. Citizens complain about employees’ abuse of them. In contrast, the employee complains about his low salary and the financial burden after the increase in high prices. Many employees search for additional jobs to improve their income. In addition to the suffering of the state’s administrative apparatus from corruption that takes many forms, such as bribery, scandals emerge frequently that affect the junior employees and senior officials.

The crises of government interests have been exacerbated recently by a shortage of employees. The government has stopped government appointments and reduced the number of administrative apparatuses in response to the International Monetary Fund requirements. Despite the government’s attempts to replace employees with computers in various departments, the situation did not improve but instead worsened.

The increase in red tape in government services led to the emergence of bribery, which became difficult to prove since it has become a natural phenomenon in society for many employees as a result of his low salary. According to specialists and experts, everyone is asking for a bribe, and people pay to accomplish his interest.

The explanation for the phenomenon of employees fleeing during working hours, according to many government employees, is that their salaries are weak and do not meet their living demands. According to the confessions of many employees, they work alongside their main job in additional work, to improve their income.

In addition to his job in the school, the teacher gives private lessons that sometimes conflict with the official working time, explaining that what drives them is the difficulties of living, the high prices, and insufficient salaries. Without treating the causes of the crises or looking at the suffering of citizens who are unable to fulfill their interests, the state has tended to implement what it called a reform plan in the state’s administrative apparatus. The IMF has stipulated that the number of employees should be reduced to 40 per cent – only 2 million employees compared to 5 million employees – in the coming years.