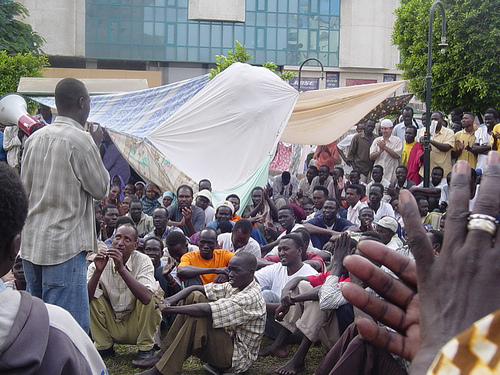 The Sudanese refugee said that the incident began when she went with her sister from the Ismailia governorate in eastern Egypt to Cairo to meet with a lawyer to review her sister’s legal status in Egypt. She added, “I was lured and sexually violated by the lawyer. (F) in his office and an Egyptian Nubian activist named (R. J), and another Sudanese refugee called (T.S.G). “After a while, the lawyer called me and asked me to come to receive an apartment lease contract for three years, so that my sister could complete her legal papers to stay in Egypt,” she added. She said, “The lawyer asked her to stay in the office the night before Eid al-Fitr in 2019. She was assured of the presence of two Sudanese refugees and a Sudanese psychologist in the office, but I was subjected to sexual abuse again by the same people.” But when she threatened them with suicide, they let her go.

The Sudanese refugee added: “The activist (R. J) tried to rape my sister.” She continued, “I left the place and returned to Ismailia, and they repeated the calls (T. S. G.) asked me to send naked pictures on the WhatsApp.” She pointed out that “the poet (R.y) called me apologizing for the rape, denying that he remembered anything, and justified what happened was because he was under the influence of alcohol.”

The Sudanese refugee confirmed that the sexual assault on her and her sister had contracted sexual diseases, which made her and her sister take an HIV test before the result was negative, noting that her rape caused pregnancy, miscarriage, and bleeding. The Sudanese refugee testimony comes after multiple testimonies on the Daftar Hekayat (Story Book) blog, all of which talk about attempts at harassment and rape.

In Egypt, social media platforms have recently turned into an alternative place for women victims of harassment and sexual violence, who have lost the ability to hold violators accountable due to the closure of public space and the selective application of the law. It is noteworthy that a survey, conducted in 2013, revealed that 99.3% of Egyptian women had suffered some form of sexual harassment.