On Sunday, the Central Bank of Egypt issued treasury bills worth EGP 19 billion (approximately $1.2 billion) in coordination with the Ministry of Finance to bridge the budget deficit. On its website, the bank stated that the first offering’s value amounted to EGP 8 billion for a maturity of 91 days and the second offering with a value of EGP 11 billion for maturity of 273 days.

The Egyptian government borrows through treasury bonds and bills over different periods, and government banks are the largest buyers. Last Thursday, the Central Bank announced two treasury bonds, worth EGP 20 billion (about $1.3 billion), after a similar offering, on October 18, so Cairo would continue the intensive borrowing policy that it has been following for years.

According to the Egyptian budget, the government aims to issue treasury bills during the current fiscal year by EGP 409.6 billion and issue bonds worth EGP 101.6 billion. 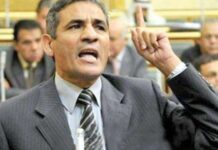