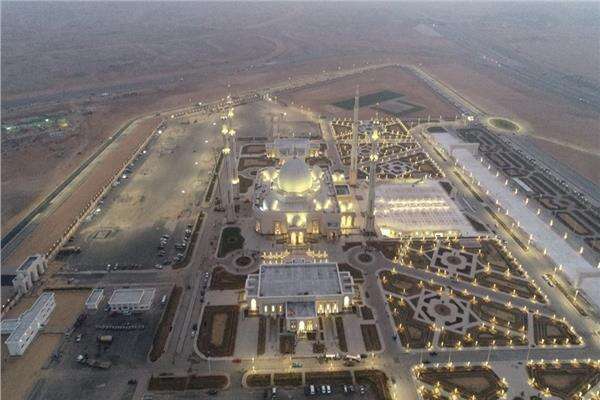 Official statements in Egypt, claiming that the Egyptians did not pay a single dime to finance the capital, sparked controversy due to what economists say are debts and a high cost that will fall on the Egyptian people’s shoulders.

The government denied the rumours about deductions from citizens’ accounts in banks to finance the rest of the new administrative capital’s projects.

Spokesman for the project, Khaled al-Husseini, said that the cost of constructing the government neighbourhood only amounted to about EGP 50 billion and that the company that owned the project sold the land to establish essential services from the sale proceeds. After that, the Egyptian presidency spokesman published, via Facebook, pictures of the mosque in the New Administrative Capital, which he described as one of the world’s largest mosques, accommodating 107,000 worshipers. Its minarets are 140 metres high.

The spokesman added that the mosque includes a group of huge halls for celebrations and events and Qur’an memorisation for men, women, and children, as well as a car park and a multi-story garage with a total capacity of 3,000 cars. These statements and pictures sparked outrage. Activists mentioned the famous saying, that feeding the hungry is better than building 1,000 mosques. The tweeters accused the authorities of wasting public money to the detriment of the people, who mainly suffer from poor public services and high prices.

This time, however, the anger took a more severe turn with the worsening of the corona epidemic crisis and the complexity of the Renaissance Dam issue, in addition to campaigns to demolish Egyptian homes under the pretext of building violations without providing an alternative. Despite some praise for the post of the presidential spokesperson, many Egyptians found it an opportunity to vent their anger, express their opinions and requirements, and broadcast their complaints and help through this official platform, hoping that it would find an echo in the corridors of the system. Notably, citizens expressed the exacerbation of poverty and the deterioration of living conditions, especially in the Egyptian countryside and Upper Egypt, and the loss of many of their jobs, especially after the coronavirus outbreak.

Activists emphasised that the stomachs of the hungry have no priority amid the waste of public money. Some activists also highlighted many personal and public grievances, workers’ problems, education, and health crises. Others offered ideas in an attempt to address some of the situations and bring the voices of the marginalised to the authorities. Not only that, but Baraa and government activists were accused of spending on the administrative capital from al-Masry’s pockets.

Economist Mustafa Shaheen said that the issue that the Egyptians did not pay anything towards the project is completely wrong because the dollar loans that arrived in Egypt to finance the new administrative capital will be added to the external debt that Egypt is obligated to pay with interest. He explained that the repayment of this debt would be a significant burden on the demand for the dollar in Egypt, which will inevitably increase in price again in the future. He pointed out that this project’s revenues from selling state lands are not included in the general budget, which could have been directed to other urgent items such as health, education, and so forth. Shaheen believes that the industrial and agricultural sectors should be the top priority of Egyptian government spending, not the housing sector. It is possible to wait ten years or more to establish a new administrative capital.

As for journalist Salim Azouz, he believes that the Administrative Capital project “represents a safe haven for the escape of members of the ruling class in Egypt, by moving government and security headquarters to it.” He explained that the Egyptians’ wealth is being squandered because of President Abdel Fattah al-Sisi’s dealing with state lands as his private property, which he distributes to whomever he pleases.

The Ministry of Housing had signed a contract to sell 21 million square metres of the project’s land to Egyptian businessman Hisham Talaat Mostafa, who was convicted of killing a famous pop singer and was released with a presidential pardon. This deal came just four days after Hisham announced a donation to the Long Live Egypt Fund to buy two million doses of the corona vaccine.

The New Administrative Capital is a large-scale project announced by the Egyptian government at the Conference on Support and Development of the Egyptian Economy on March 13, 2015. According to the project’s spokesman, it is scheduled to receive state employees in the newly established ministries in the middle of this year.