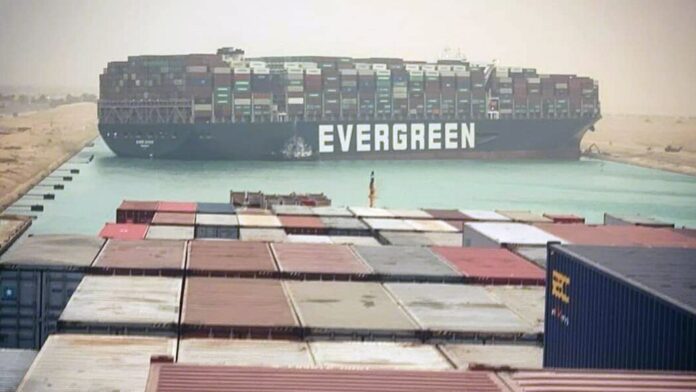 A new crisis facing the Egyptian Suez Canal, after the Japanese transport companies announced that they would search for alternative routes between East Asia and the important markets in Europe, due to the current problems that resulted from the delinquency of the giant container ship Ever Given. It seems that instability in the Middle East is one of the factors behind this. Still, the Japanese company, Shwe Kisen Kaisha, the owner of the tanker Ever Given, is not satisfied with the legal dispute resulting from the crisis, especially concerning compensation.

An Egyptian court approved a request submitted by the Suez Canal Authority to the precautionary seizure of the ship in its current location in the canal’s Bitter Lakes until compensation is paid (about $ 900 million). The Taiwan-based Ever Green Line company had chartered the vessel to cut a voyage from China to the Dutch city of Rotterdam, and it was under the control of a local marine captain at the time of its passage through the Suez Canal. But the ship ran aground for six days, which led to the Authority’s losses in the millions due to the disruption of navigation. If the ship’s owners are forced to pay compensation in the end, this will work in the interests of Russia and China, and they will be the biggest beneficiaries.

The first alternative is to return to the Cape of Good Hope in South Africa, which trade ships used before the opening of the Suez Canal, and since then, traffic through it has almost stopped. The other alternative, which has gained attention in recent years, is the Arctic route to Russia’s north. This route has become highly navigable due to the shrinking of the polar ice cover in the summer, as one of the factors resulting from the phenomenon of climate change, high temperatures, as well as advances in ship technology that enable them to continue their work in areas that are partially covered by ice.

The use of this navigation route along the Russian polar coast will have clear benefits, most notably the shortening of the journey from approximately 38 days to less than 19 per day, which means significantly reducing the amount of fuel and the consequent reduction in the level of pollution and emissions. In 2010, eleven ships completed a voyage that extended to 3,500 kilometers along the northern coast of Russia, but in 2020 this number rose to a record number of 133 ships. One study has predicted that this number will reach 500 crossings annually in 2030, increasing to 900 by 2050.

Russia is promoting the Trans-Siberian railway as a direct link to Europe from the eastern port city of Vladivostok. This route already exists and is currently being used, but there are concerns about reliance on Russia’s rail infrastructure. However, Russian President Vladimir Putin seems to expect small gains from the possibility of using these two paths. In January, the Japanese Hankyu Hanshin Express Corporation launched a road transport line using the Trans-Siberian Railway.

The company said that the road takes two weeks less time than marine navigation, and the price is also halved than the use of air transport. Parcels are shipped from Japan to Vladivostok and then transferred by rail to Kotno in Poland, where they can be sent to the rest of the European countries.

However, Stephen Nagy, an academic at the International Christian University in Tokyo, believes that the Suez Canal is “the tried and trusted course.” He adds that “the Arctic road cannot be used throughout the year, while the Trans-Siberian railway cannot accommodate this large amount” of transport and freight operations. Nagy points out that it is certain that the Russians and the Chinese want to take advantage of the economic opportunities that will come through using these methods. Still, this matter would greatly complicate Japan’s diplomatic relations with the United States. Although the Japanese shipping company Mitsui OSK Lines, which is the largest in Japan, has not explicitly expressed its opinion on the Russian Arctic route, it closely follows its development work.

Observers believe that Whether Japanese companies decided to take alternative routes to the Suez Canal or maintain the most reliable corridor, the threat to the throne of the Egyptian Canal has become clear.

Tahia Masr Fund: A little bit of transparency and a lot...