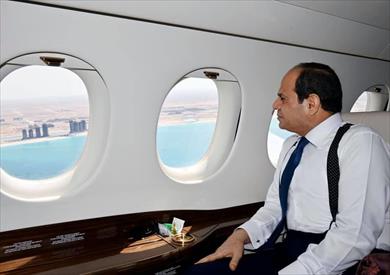 In early August, President Abdel Fattah Al-Sisi spoke angrily about the double in price of subsidised bread on which 66.7 million citizens depend, and stressed the need to increase the price of bread because “it is not reasonable for the price of 20 loaves to be the price of one cigarette.”

The president seemed, as usual, to be very upset about the size of the “burdens” borne by the Egyptian state, and demanded the poor bear the measures to raise subsidies for the sake of the nation’s elevation and the building of a strong state. It seems that the austerity slogans raised by Sisi concern the poor only as he and his men do not care about anything, as the Egyptian regime recently purchased a giant Boeing B747-8 luxury plane, a jumbo jet, to replace the current presidential plane.

The price of the luxury plane that the Egyptian regime bought to serve its leader is about $418.4 million, equivalent to about EGP 6.6 billion. According to Sisi’s calculations, this amount is equal to the price of 134 billion subsidised loaves of bread. Sisi’s new plane has been neglected and has been in Boeing’s aircraft hangars since 2012, after the German company Lufthansa cancelled its purchase order, as it was part of a deal concluded by Lufthansa with Boeing to supply it with 20 planes, and the German company accepted 19 of them but rejected this plane.

According to the German Flag Review website, which specialises in aircraft, Lufthansa cancelled the purchase of the Boeing B747-8 for two reasons. Life came back to the B747-8 plane after it was included in Boeing’s sales orders last February, so that the company’s technicians began operating the mechanical systems in July, and in August the plane took off directly to Boeing Airport in Everett, where it appeared on the tarmac under the name SU-EGY, which indicates that it has become affiliated with the Egyptian government because SU is the symbol of the Arab Republic of Egypt.

Paradoxically, the value of this plane is slightly less than the price of 14 planes purchased by the presidency during the 30-year reign of the late President Hosni Mubarak. Their combined value amounted to $507 million dollars, while Sadat owned two Boeing 707s, which were gifted to him by Sheikh Zayed bin Sultan, the ruler of the Emirates. In addition, a helicopter was gifted to him by US President Jimmy Carter whilst Gamal Abdel Nasser preferred to rent a plane for his transportation and did not buy a presidential plane during his years in power. The B747-8 will replace Egypt’s current Airbus A340-200 SU-GGG presidential aircraft, which has been in service since 1995.

This is the second presidential plane deal in the era of Sisi, as the regime previously bought four luxury planes in 2016, the Falcon-7X model, produced by the French company Dassault Aviation, in a deal worth 300 million euros ($354 million). The Falcon is 23.2 metres long, 2.34 metres wide and 1.88 metres high. It can carry eight passengers, other than the cabin crew, and fly approximately 11,000 kilometres. It comes equipped with a number of services such as satellite phones, coffee makers, and microwave ovens for heating food, as well as spacious sitting and sleeping areas.

These planes caused a sensation in 2016, as they came at a time when Egypt was facing a severe economic crisis, and only three months before the government’s decision to liberalise the exchange rate of the pound, which was followed by the decision to raise the prices of petroleum products and lift subsidies on electricity and other basic materials. This reflects the extent of the separation of the Sisi regime from the Egyptian people. At a time when the country is facing economic crises, and the regime is taking economic measures that have led to the impoverishment and suffering of millions of Egyptians, the president is buying luxury planes worth more than $750 million, and is building luxurious presidential palaces in new cities.

The problem is that Sisi does not find a contradiction between calling for austerity measures and his actions that are completely contrary to austerity. He has previously expressed this frankly when he criticised the establishment of new luxurious presidential palaces: “Oh, my son, and he gave me, is it for me? This is for Egypt.” As if the nation’s elevation lies in building the new palaces inhabited by Sisi and his family, and not in feeding the poor and maintaining support.

After Rafah and Sheikh Zuweid 4,000 families in Arish threatened with...

A nation at risk as Egypt suffers from a shortage of...