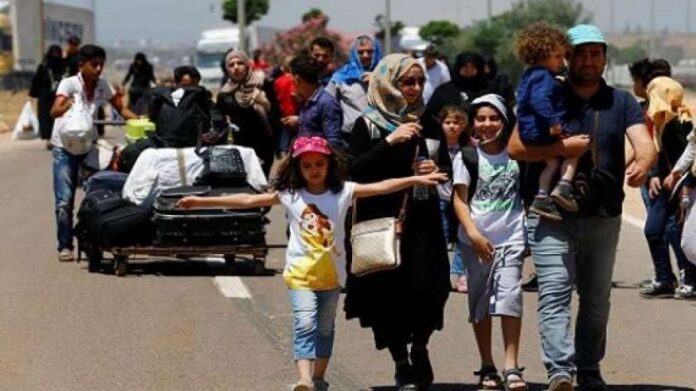 Supporters of the regime of President Abdel Fattah Al-Sisi are circulating on social media a post stating that there are about “20 million foreign residents” living in Egypt safely and not facing any problems, indicating that Egypt is “the protector of the Arab and Islamic nation” under Sisi’s leadership.

The statement that there are “20 million refugees in Egypt” is incorrect, as the Egyptian authorities estimate the number of refugees and migrants on its lands at only about six million, but the most important question is, are these refugees and migrants really living in safety and peace? Numerous facts dispel this myth that the Sisi regime is creating about itself.

Two Eritrean migrants face deportation from Egypt within the next few days, after being held in an Egyptian prison for more than seven years without legal grounds. The first is Alam Tesfai Abraham, 42, who was arrested in March 2012 while trying to cross from Sudan to Libya via Egypt seeking to migrate to Europe. He has since been imprisoned in the foreigners’ ward of Qanater Men’s Prison. The second is Kiprom Adhanom, 37, who immigrated from his country to Sudan unofficially, and in July 2013 he was kidnapped by a human trafficking gang and taken to North Sinai. In December of the same year, Adhanom’s kidnappers thought that he had died under torture, so they got rid of his body, but he was found by an Egyptian citizen and handed over to the police, only to end up, in September 2014, imprisoned in the foreigners’ ward of Qanater Men’s Prison.

A few days ago, the Egyptian security authorities subjected Abraham and Adhanom to a compulsory PCR swab in a hospital outside the prison, and informed them of a decision to deport them after the results of the swab appeared, and forced them to sign a temporary Eritrean travel document. The two migrants face a charge of high treason if they return to Eritrea, for their illegal escape from the country, as well as their evasion of forced conscription. They are expected to be imprisoned in Eritrea, with an increased risk of being tortured in a way that puts their lives at risk.

Many international and Eritrean human rights organisations called on Cairo to stop the forced deportation of Abraham and Adhanom to Asmara, reminding the Egyptian regime of its international obligations, as Egypt is a signatory to the 1951 United Nations Convention on Refugees and its 1967 protocol, which prohibits the expulsion or return of refugees “to the borders of the regions” when his life or freedom is threatened because of his race, religion, nationality, membership of a particular social group, or political opinions.

The family of the opposition academic and asylum seeker from Chad living in Egypt, Tom Erdimi, revealed that he was disappeared after the Egyptian security services arrested him last October. Erdimi, 66, was the chief official in the office of the late Chadian President Idriss Deby, to whom he is related. He is also the twin brother of the founder of the Chadian Union of Resistance Forces, Timan Erdimi, who led an armed rebellion against Deby in 2009. Erdimi left Chad in 2005 after disagreements with the government at the time, which turned him from a government official into an opponent. He went to the United States of America to seek asylum, but his request was rejected because his brother joined the armed opposition, so he came to Egypt.

The Chadian dissident entered Egypt in November 2014, registered with the United Nations High Commissioner for Refugees in Cairo in April 2015, and obtained an asylum seeker card in December 2019, then was forcibly disappeared in October 2020, days after he told his family that he feared for his life. Erdimi’s family said that they had physical evidence – which they did not disclose – that the Egyptian authorities arrested him, suggesting that this was at the request of the Chadian government, and that he is still in Egypt and has not yet been deported to N’Djamena.

During the past two months, the family organised protests in front of the Egyptian embassy in the Chadian capital, N’Djamena, the Canadian capital, Ottawa, and the French capital, Paris, with the aim of putting pressure on the Egyptian government to disclose Tom’s whereabouts or release him.

Uyghur refugees handed over to China

Since 2017, coinciding with the Chinese authorities’ fierce attack on the Muslim Uyghur minority, the Sisi regime has been targeting Uyghur refugees in Egypt, many of whom study at Al-Azhar. In July 2017, the Egyptian security launched a campaign targeting dozens of Uyghur students studying at Al-Azhar. Their homes and workplaces were stormed and searched without judicial permission, and a large number of them were arrested without a judicial warrant or a decision to arrest them from the Minister of Interior. A number of them were also detained without legal basis and prevented from contacting their families.

The Egyptian authorities were not satisfied with that and went on to arrest dozens of the Uyghur minority who tried to escape Egypt through air and sea ports, and detained a number of them in prisons, and allowed Chinese security officers to interrogate them inside Egypt, before a group of them were later deported to China at the request of the Chinese security forces.

The Egyptian regime’s move came at the behest of the Chinese regime, which did not like the increasing numbers of Uyghurs in Egypt, and the Egyptian regime responded to these fears with a desire to enjoy distinguished relations with Beijing. With these practices, Egypt violated international law by deporting people who are likely to be subject to human rights violations, according to Article 3 of the Convention against Torture and Other Cruel, Inhuman or Degrading Treatment or Punishment of 1984, which stipulates that “no state party may expel any person or return him or hand him over to another state, if it has substantial grounds for believing that he would be in danger of being subjected to torture.

These three facts, and many others, hit the narrative that the Sisi regime is trying to market about itself through electronic committees, that he is the protector of refugees and the oppressed in addition to international agreements in order to gain the approval of repressive regimes that resemble his own.

Osama Morsi: The son of the late president is being subject...