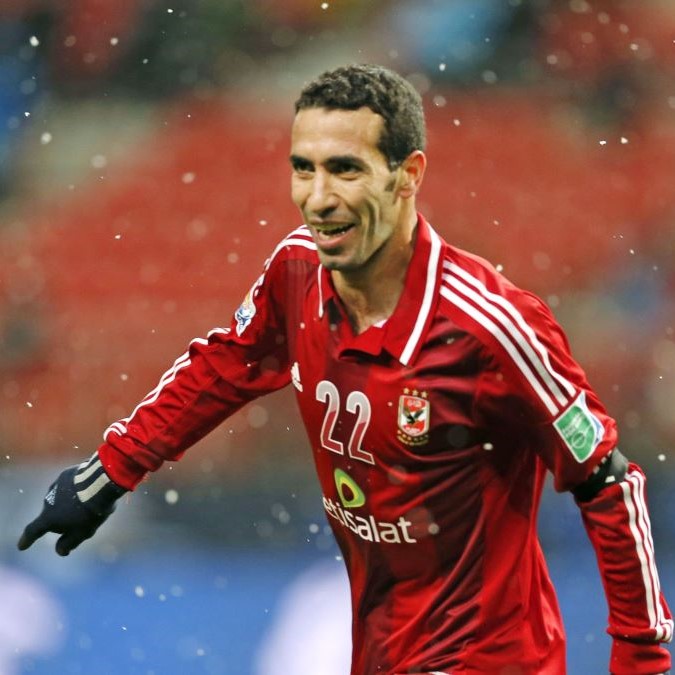 Media figures close to the regime of President Abdel Fattah Al-Sisi, led by broadcaster Amr Adib, launched an attack campaign targeting the former Egyptian national team and Al-Ahly club player Mohamed Abu Trika, one of the most prominent and popular football stars in Egyptian history, whom the regime has placed on the “terrorist list,” without any judicial convictions against him.

The campaign against Abu Trika is renewed from time to time, with the aim of detracting from his overwhelming popularity in Egypt, which is not matched by the popularity of any sports figure, and is led by President Sisi himself.

The attack campaign began after Al-Ahly congratulated its former player, Muhammad Abu Trika, on his birthday. The official Al-Ahly page on Facebook published a post wishing a happy birthday to the beloved star. After this the media coordinated an attack on Al-Ahly club and its management, claiming that they support a “terrorist.” The matter reached the point where Amr Adib, presenter of the Al-Hekaya programme on the Saudi channel MBC Egypt, asked the Attorney General to prosecute Al-Ahly’s board of directors for what they have done.

Lawyer Samir Sabry, who is known for his many complaints against celebrities, and one of the well-known supporters of President Sisi, submitted a report to the Attorney General and the Supreme State Security Prosecution against Mahmoud Al-Khatib, Chairman of Al-Ahly Club Board of Directors. In his statement, Sabri said that the club’s board of directors and its pages on the communication sites celebrated the birthday of Muhammad Abu Trika, the fugitive outside Egypt, who is on the terrorism lists, accusing the club of defying the Egyptian judiciary, the constitution, the law, and the feelings of the families of the victims of terrorist operations.

The attack campaign relied mainly on spreading false rumours about Abu Trika. For example, Amr Adib said that the retired player “did not offer condolences to an officer or soldier who was killed in a terrorist incident,” indicating that this is a sign of Abu Trika’s support for terrorist operations. But a simple search on Abu Trika’s Twitter account or his Facebook page reveals exactly the opposite. For example, in April 2020, the former player offered condolences for the martyrs of the army who died after their vehicle was targeted with an explosive device in North Sinai. Abu Trika wrote: “Martyrdom for the sake of the homeland is eternity in heaven and in hearts and minds. God bless the martyrs of Egypt in the city of Bir Al-Abed and put them in spacious gardens, and may God protect Egypt and its people from all bad and bad things.”

In June 2019, Abu Trika mourned the martyrs of the police who fell after targeting a security post in North Sinai, where he wrote: “Voices were raised with the Eid takbeer and other voices were raised with the pronunciation of martyrdom to meet their Lord. May God have mercy on the martyrs of the homeland in the ambush of Al-Arish, and my sincere condolences to the Egyptian people.”

After the bombing of St. George’s Church in Tanta in 2017, Abu Trika wrote on Twitter: “My sincere condolences to the Egyptian people and to the families of the victims of St. George’s Church, and my wishes for a speedy recovery to all the injured, and may God protect Egypt and its people, and perpetuate tolerance and peace.” After the terrorist attack at the Al-Rawda Mosque in 2017, in which more than 300 citizens were martyred, Abu Trika wrote: “May God have mercy on the martyrs of Al-Rawda Mosque and grant them peace in His vast gardens, and may God protect our country Egypt from all harm and evil.”

Amr Adib Abu Trika was accused of “visiting the families of terrorists who participated in the killing of Kerdasa Police Department officers” in 2013, but this is also a malicious rumour aimed at accusing the beloved star of supporting and financing terrorism. This rumour is based on a photo of Abu Trika with an elderly woman, published by a number of pro-regime newspapers in 2014, claiming that the photo is of the mother of Taha Abdo, one of the men accused of participating in the Kerdasa massacre, but the truth is that the photo is of one of Abu Trika’s neighbours in his village Nahia, and it was taken during his brother’s wedding. Taha Abdo was arrested among hundreds of Kerdasa residents after the events of the police station. He was released with 95 people in February 2014, and was never brought to trial.

Abu Trika was one of the few celebrities who participated in the January 25 revolution to demand the overthrow of the regime of ousted President Mohamed Hosni Mubarak. He refused to shake hands with the late Field Marshal Mohamed Hussein Tantawi, who headed the military council after Mubarak’s departure, due to the Port Said massacre that took place during his rule and killed 73 Al-Ahly fans. The retired player supported the late President Mohamed Morsi during the run-off in the 2012 presidential elections, which led many to believe that he belonged to the Muslim Brotherhood.

For these reasons, Abu Trika was the target of President Abdel Fattah Al-Sisi’s revenge after he took office in 2014. Since then, the prosecution of the former player began on charges of supporting and financing the Muslim Brotherhood, and his money and all his property was frozen, and he was placed on the terror list more than once.

Abu Trika was forced to travel to Qatar, where he worked as a football analyst for beIN Sports, and he could not return to Egypt for fear of arrest. Despite this, over the course of seven years, not a single court ruling was issued condemning Abu Trika on charges of supporting and financing terrorism, which confirms that the regime has nothing to actually condemn Abu Trika, but its goal is to destroy the image and legend of Abu Trika in the eyes of his fans.

On the anniversary of the detainees’ vehicle massacre mass killers are...