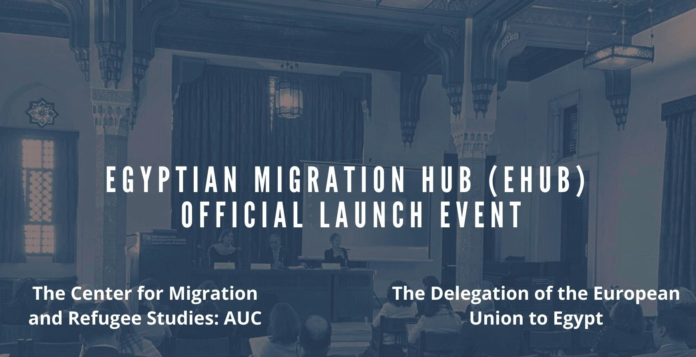 During the launching of the Egyptian Migration Hub in The Center for Migration and Refugee Studies, several experts criticized the conditions of refugees. They demanded establishing a transparent system that enables refugees and asylum seekers to follow clear steps regarding the family reunion. Also, they are required to raise awareness in refugees’ communities about the concerned authorities assigned to receiving the family reunion requests and their related documents to achieve the purpose of such requests.

Alongside the conference, the speakers demanded the alleviation of restrictions imposed on the refugees’ accessibility to job opportunities after three years of their residency in Egypt, also in the case of having an Egyptian wife, husband or children of Egyptian nationalities, which comes in compliance with Egypt’s obligations under the international law. The need to exempt refugees – and asylum seekers hopefully – from the obligatory strict requirements of foreigners to get a work permit, as refugees cannot meet such conditions due to their special status as refugees.

The hub proposed to renew the commitment of the Casablanca Protocol and the Four Freedoms accord through the clarification of local regulations based on it, in addition to providing more guidance for asylum seekers and refugees to succeed in initiating a project in Egypt as an official alternative for running businesses in the informal sector. Access to legal protection, especially for domestic workers, must be improved. Many asylum seekers, refugees and rejected asylum seekers work in this field. They suggested either including them under the regulations of the Egyptian Labor Law or providing a separate legal framework for the protection and guaranteeing an effective tool to submit complaints of harassment and maltreatment that they may be exposed to.

The hub also criticized the difficulties that the asylum seekers’ children (and rejected seekers) face when applying for primary schools since all children should have the right to access free primary education. Instead, this right is for the Egyptian nationals only. And, exceptionally, it may extend higher fees to Sudanese, Jordanian, Libyan, Saudi and Palestinian students in specific conditions. Should mention that the Syrian and Yemini students have the same exception through an administrative decision, yet it is unobvious if such a decision will be renewed annually or not. Among the other difficulties that have been monitored are that students must submit an active certificate or similar document, legal residency, and permission from their embassies to enrol in schools. Also, they may face problems during the registration. Some refugees choose not to enrol their children in public schools, fearing racism and discrimination. The parents of children were unsatisfied with the quality of education in public schools, especially since the schools are overcrowded. Also, it has been monitored that there are a lot of problems related to paying extra fees as the only way to get their children registered.

The experts confirmed that they could not access the Eritreans, Ethiopians, Iraqi, Somalin and South-Sudanese primary public schools. Instead, they have to go to private schools or uncertified community education centres to provide any education to their children. Regarding the detention and expulsion, the experts emphasized that many migrants confirmed that they were subjected to arbitrary arrest and the risk of deportation by the Egyptian Police, even though they have active documents that clarify that they’re refugees or asylum seekers. It should be mentioned many of the complaints was about the ignorance of authorities that the refugee card issued by the UNHCR are valid to identify the nationality and residency in the host country, in addition to other complaints related to the unjust treatment during detention that includes being deprived of knowing the reason of arrest or being banned from getting contact to their families or lawyers.

The experts explained that the discrimination incidents and the refusal of police officers to provide help for refugees and asylum seekers created a feeling of mistrust and fear from the authorities. Besides, the rejected asylum seekers who reside in Egypt without a valid residence permit or ID card cannot contact the Police or have access to courts without being at risk of deportation. It was suggested to establish an alternative complaints agency outside the police stations to guide plaintiffs and refer complaints to the assigned policeman. It should also provide training to raise the awareness of police officers about the vulnerability of refugees and asylum seekers and eradicate racial and discriminatory behaviours against migrants. Such measures may minimize the number of failure incidents for the refugees to benefit from the Police protection, and it will also improve their access to lawyers in case of detention to secure ongoing communication with them.

Finally, the hub affirmed that refugees could not get active travel documents from the Egyptian authorities. If they want to leave, they must travel with their national passport, which generates a more significant problem as they cannot renew their expired passports from their embassies.

Will Egypt give up Nile water under US pressure?