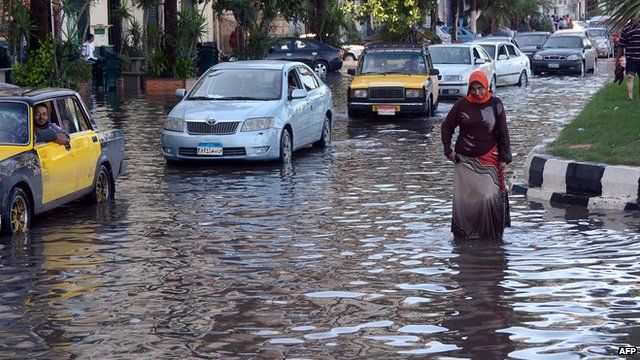 In less than an hour and a half of rain, the streets of Cairo appeared to sink. The rain has paralysed public life, killing at least five people, including a child.

That failure prompted harsh public criticism against authorities, and some social media critics joked that the streets of Cairo should be used as an alternative water resource to the Nile, alluding to the Renaissance Dam crisis.

Private school buses carried many children back from school, but some were only able to reach their homes and parents after midnight. Many were on the roads and the price of transport services provided by private carriers such as Uber and Karim doubled. Even bulldozers intervened to save people.

Statements by the Egyptian cabinet that Egypt is unable to establish a rainwater drainage system have drawn widespread cynicism on social media. Social media campaigns questioned how billions were being spent on building presidential palaces at the same time. Egyptian President Abdel Fattah al-Sisi has admitted building new presidential palaces after a contractor accused him of corruption.

The Egyptian cabinet said that the establishment of a network to drain rain requires billions of pounds and that the financial capabilities of the state would not allow it, stressing that most countries do not implement these expensive networks.

This came during a meeting of the Council of Ministers on Wednesday in which the cabinet reviewed the most important measures taken to deal with the repercussions caused by the weather. The cabinet said that the cost of establishing these networks is billions of pounds, as there is no rain drainage network in Egyptian cities. They said that existing cities were planned without this network, but this could be refuted by the fact of that some of the sunken streets were in newly established cities, such as the Fifth Settlement.

The Egyptian cabinet’s claim that it was difficult to establish a rain drainage network came at a time when Egyptian businessman Mohamed Ali revealed that President Abdel Fattah al-Sisi had spent billions on new presidential palaces that the country did not need.

Severe rain, especially in areas east of Cairo, have caused water to accumulate on several main streets. Among those sunken streets is one that runs under a tunnel on the main road to Cairo Airport. It was closed and travellers failed to reach the airport.

Some passengers broadcasted videos from inside the airport depicting passengers forced to walk through the water.

EgyptAir announced late Tuesday that it was delaying the departure of its planes from Cairo Airport due to heavy rain that closed roads leading to the airport and delayed the arrival of passengers, after the spread of videos of a passenger lounge inside the airport flooded with rain water.

Photos and videos of flooded streets circulated on social media, especially in Heliopolis and the Fifth Settlement.

At least five people were killed in Egypt, including a three-year-old boy in Gharbia province, who was electrocuted.

Many social media users mourned the 9-year-old girl Marwa Sadeq Abdul Majeed. A video captured her body being recovered from the water hours after she was killed by an electric shock after touching an electricity pole near her family residence in 10th of Ramadan City. After this, several other cities cut off electricity fearing similar cases.

Egyptian media published news on the closure of the regional ring road established recently as a highway to link several provinces, because of a sinkhole at a depth of 30 metres, although the road when it was built was celebrated by the government as a great achievement. It was supervised by the Engineering Authority of the Armed Forces and opened by General Abdul Fattah al-Sisi last year.

A social media campaign was launched against two restaurants that refused to allow students to enter their toilets after being stuck on a school bus for seven hours.

Pro-Sisi social media campaigns linked to intelligence services published old photographs and videos of flooded Western capitals and cities filled with water and described those who published videos of Egypt’s floods as “enemies” who were trying to discredit Egypt.

Those campaigners overlook that such situations happen when environmental disasters occur in these countries, which may exceed their rapid response capabilities, but these countries are preparing infrastructure to mitigate flood damage.