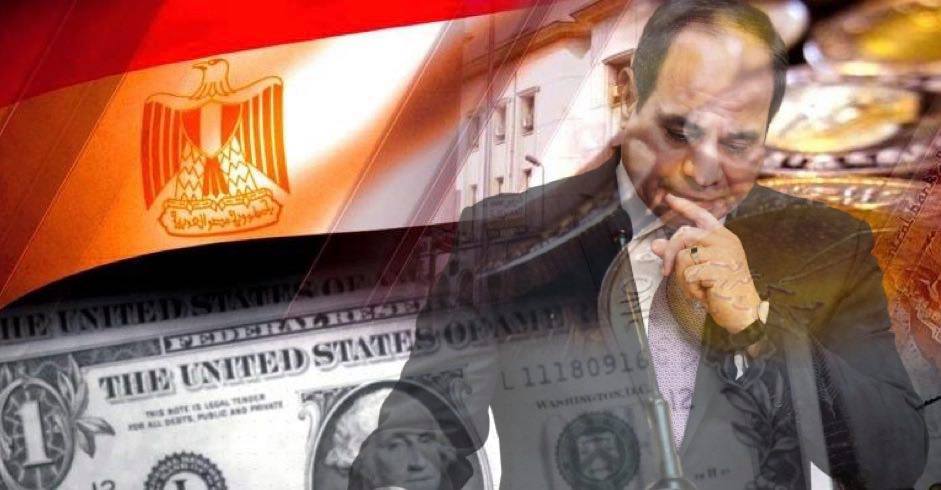 The Central Bank of Egypt announced that the volume of foreign debts owed on Egypt increased to about $ 112.67 billion at the end of December of 2019, compared to $ 96.61 billion at the end of December 2018, achieving an increase of 16.6%, amounting to $ 16.1 billion on an annual basis. Thus, Egypt’s external debt has jumped by 145%, since President Abdel Fattah al-Sisi came to power in mid-2014. When Sisi assumed power, foreign debt was not more than $ 46 billion, as a result of his expansion of borrowing from abroad to finance projects that are not economically feasible, such as the “branching” of the Suez Canal and the new administrative capital.

The bank’s data showed an increase in the volume of external debt by 3.31 billion dollars during the last quarter of last year, and the acquisition of long-term debt on 89.9% of the total Egyptian external debt, which is about 101.4 billion dollars. The bank indicated that the remaining amount, which amounted to $ 11.3 billion, is within the short-term foreign debt that will be paid within a year, pointing to the acquisition of the largest foreign government debt, recording about $ 61.42 billion at the end of last year, compared to $ 48.07 billion at the end of 2018; an increase of 13.4 billion USD.

Finance Minister Mohamed Maait said, on the Parliament’s Plan and Budget Committee, that his country “has started to move with international institutions to write off some external debts, or interest due on them, and to postpone others, against the backdrop of economic repercussions resulting from the Coronavirus crisis, which led to the use of 5.4 Billions of dollars of the country’s cash reserves in just one month, is last March.” The IMF Board of Directors is scheduled to meet on May 11 to consider Egypt’s request for a loan under the rapid financing instrument, the IMF website shows.

Last month, Egypt asked the IMF for a financial aid package to help it overcome the repercussions of the new Coronavirus, and is seeking a loan under the rapid financing tool in addition to emergency financing under the standby agreement program. According to the information on the website of the International Monetary Fund, Egypt is likely to be eligible for up to $ 2.78 billion under the rapid financing instrument and about $ 4 billion under the credit standby agreement. Both programs are designed for countries with urgent or potential balance of payments problems.

Prime Minister Moustafa Madbouly said last week that Egypt was asking for help because the Coronavirus crisis was putting pressure on tourism and other major sources of foreign currency. And tourism, which the Egyptian Minister of International Cooperation recently said represents 5 % of gross domestic product, is almost halted because the government closed its airports to most civil aviation in March. The crisis also threatens financial transfers from Egyptians working abroad, which constitute 10% of GDP, as well as exports of natural gas and the Suez Canal entry.

Love is banned: No food subsidies for the newly married couples