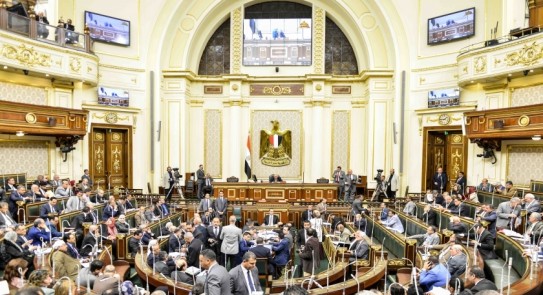 The Egyptian House of Representatives agreed on Monday to amend a draft law submitted by the Egyptian government so that each governorate has a military advisor and a sufficient number of assistants to contribute to the periodic field follow-up of services provided to citizens and national projects under implementation. This came during the parliament’s discussion of a draft law submitted by the government to amend some provisions of Law No. 55 of 1968 regarding public defence organisations and Law No. 46 of 1973 on military education in high schools and universities.

The amendments to the draft law stipulated the addition of two new articles, one of which requires that each governorate have a military advisor and a sufficient number of assistants, and their appointment and determination of the conditions for occupying the position shall be issued by a decision from the Minister of Defence. While the second article determines the competencies of the military advisor to the governorate, which includes contributing to the periodic follow-up of services provided to citizens and ongoing projects, and permanent communication with citizens in the context of preserving national security.

They are also entrusted with fulfilling the obligations of safeguarding the constitution, preserving the foundations and assets of the state, and coordinating with educational authorities at the governorate level to implement the curriculum of military education in accordance with the rules set by the Ministry of Defence.

Observers view with concern the increasing interference of the military in public life in Egypt, and their control over the joints of the political and civil state, in the context of what some describe as “the militarisation of the state.”  The new law gives military advisers wide powers, not only related to the country’s defence functions but also to oversee the services provided to citizens and national projects. Opponents say the new law means that the military adviser and his assistants are the real governors and that the governor will be just a front to the military-men who are assigned with all tasks.

Observers say that the Egyptian regime controls almost all the joints of the state in similar ways and that even if the ministers are civilians, they have no power, at a time when the high military officers have the real authority. For example, the engineering authority undertakes the construction of roads, new cities, and construction, while bodies affiliated with the armed forces provide basic commodities, even trade matters, all of this in lieu of civil state institutions. During the years of al-Sisi’s rule, military power shifted to dominate almost all of the country’s joints.

Despite the military regime’s control of power in Egypt, it seeks to legalise that control through amendments to laws. Recent legal amendments also included expanding the influence of the military on high school students and university students in so-called military education. Opponents say the Egyptian regime is trying to educate new generations on military concepts and to ensure that they are loyal to the army.