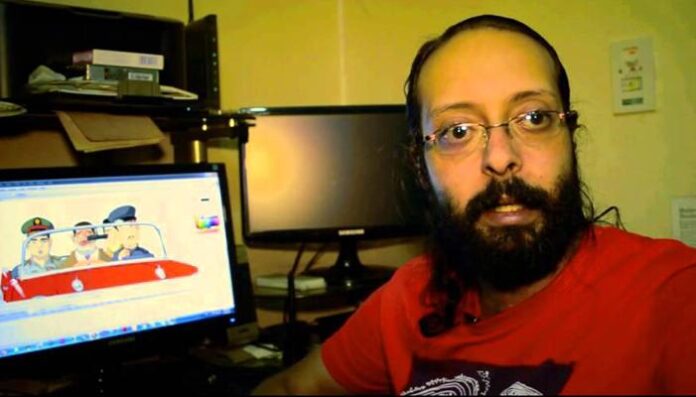 The Egyptian security forces arrested, early on Monday, the well-known cartoonist Ashraf Hamdy, the founder of Egyptoon YouTube channel. Ashraf wrote on his Facebook at the time of arrest, “I am being arrested.”

Ashraf, who works as a dentist, is one of the most famous cartoonists in Egypt, with more than 250 million followers of his YouTube channel. He worked previously for Sabah al-Kheir (Good Morning), a state-owned magazine, and for Masrawy news website. He is known for the Aymoon al-Magnoon (Crazy Ayman) cartoon character, which he uses in animated videos to present social criticism comments. However, he has commented on politics beforehand.

The Arab Network for Human Rights Information commented in a press release on the arrest of Hamdy that his arrest came in the early hours of the tenth annual anniversary of the 25January Revolution, which is the same day as Police Day. This indicates the escalation of arrest campaigns and spreading the atmosphere of fear among citizens. ANHRI added that the coercion of every disobedient voice and pen confirms the hostility of the Egyptian authorities against the freedom of press.